It’s a Monday holiday, which means an already beautifully languorous and relaxed weekend (if you can really call a weekend relaxed when it includes staining a set of cubbies, running a half marathon, going to a parade, and having a dinner party…Hey, that doesn’t sound relaxing at all!! And yet, it was. Something in the air, I think.) is even longer. I think every weekend should be a three day weekend. I’m convinced that it would actually increase everyone’s productivity by oh, at least 5 trillion percent, or so. Saturday allows you to begin to unwind, Sunday allows you to relax and also putter through some odds and ends that need doing, and by Monday you are free to be completely loose and carefree and rejuvinated so that on Tuesday you’re ready to jump back into work. Well, maybe.

Anyway, what I’m dancing around and trying to get at here is that on Monday holidays (however little the person whom the holiday is celebrating actually deserves said veneration, ahem, Columbus didn’t actually discover America, ahem, the Vikings did, ahem. Sorry, something in my throat there.) my mind had reached a state of complete and utter emptiness. Which, I think in Eastern spiritual practices is considered an ultimate goal. In Western practices it’s considered being blonde (hehe, gotta live up to your stereotype sometimes!). And either way, it turns out it makes it very hard to think of something to write, even if you really want to.

Am I allowed to just say these calzones were seriously delicious, you should make them, the end!? Because they were. I think “calzone” might actually be Italian for delicious. Or at least, it should be. Think about it. You take all sorts of delicious seasonal ingredients, add delicious cheeses, stuff it into a delicious dough, and then eat it steamy and crusty and gooey after it comes out of the oven. Overall they’re just a pretty darn good idea. They also make wonderful leftovers for lunch because your food is all neatly wrapped up in a portable little package and they reheat nicely. You can stuff them with whatever vegetables are in season, but even if it weren’t in season I’d say winter squash is one of my very favorite fillings. The combination of warm, sweet squash with pungent, nutty cheese sings songs of fall and coziness and contentment. 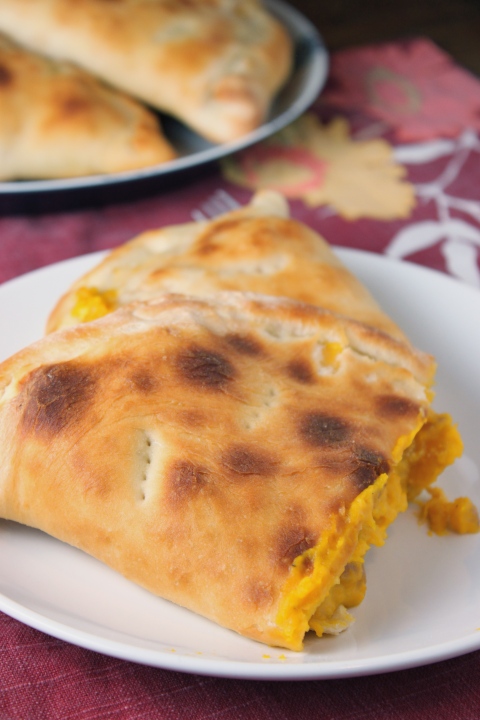 When I decide I’m going to make something involving roasted winter squash, I often roast the squash the night before, while I’m making and eating that supper. Then I scrape the cooked squash into a Tupperware while we’re doing dinner clean up and refrigerate it to use the next day. If I determine I’m going to make either calzones or pizza, I usually make the dough for it in the morning, while I’m waiting for my coffee to brew, and let it rise in the refrigerator over the course of the day. That way when I get home and am hungry and not in the mood to wait 2 hours for dough to rise or squash to roast, I don’t have to because they’re already prepared! At this point all that’s required is to mix the squash with some caramelized onion, garlic, and the cheeses – one mild and one potent, it my general rule – and roll out the dough. You can also add other roasted vegetables and spices of course. I considered adding roasted peppers or some spinach and some nutmeg or even tarragon. But, in an Alice Waters moment of wanting to let the squash speak for itself, I decided to let it star on its own. With some salad and maybe a little tomato sauce for dipping your calzone, it’s the sort of meal that makes you feel ridiculously blissful and warm and fuzzy inside. Kind of like a long weekend. 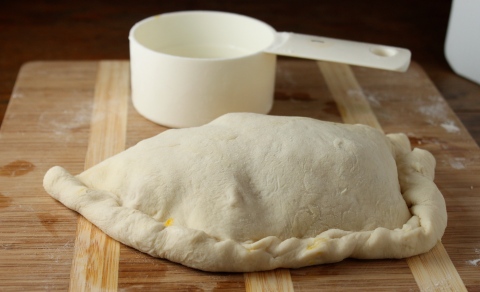 Dough: (or you can use pre-prepared pizza dough. I won’t tell anyone this time around, I promise)

You are currently reading Winter Squash Calzones at Five And Spice.