Getting Down to Basics

On this page:  Handy spice and herb combinations; contents of a well-stocked pantry

I’m all for fusion cuisines and boldly attempting new blends of spices and flavors that no one has dared to attempt before. But, on a daily basis, it’s also incredibly useful to have in your mind a few basic combinations of spices that you know work. Most of these come from traditional cuisines, so they’ve most likely grown out of what spices were readily available through history in particular climates, however they have the added benefit of tasting great. A flavor blend doesn’t generally become a staple of an ethnic cuisine by tasting bad (no snide comments about the British Isles necessary here, thanks).  The flavors I think are really the critical underpinning flavors together are in bold.

Italian/Mediterranean: oregano (more Greek), basil (more Italian), lots of garlic, and sometimes some rosemary; a bit of anchovy, capers, olives, and/or balsamic vinegar can lend a Mediterranean flair as well.  Tomatoes tend to make frequent appearances, though I suppose they’re not technical a spice.

French: garlic, thyme, marjoram, rosemary, sometimes tarragon, sometimes sage; garlic plus mustard plus either thyme, tarragon, or sage always makes for a great combo.  Red or white wine frequently work their way into French food, along with a good amount of butter.

North African/Middle Eastern: cumin, coriander, cinnamon, plenty of paprika (the smokey variety can be great as well), a little cloves, sometimes fennel or mint, dried sumac if you have it for some reason, and some preserved lemon or lemon juice never hurts; these cuisines often use a combination of fresh cilantro, parsley, and mint in their seasoning, as well as a lot of yogurt on top of things.  And a lot of tomato here, too.

Northern Europe: dill or lemon pepper and sometimes caraway for savory, and for sweet either cardamom, or else cinnamon, cloves, dried ginger, and nutmeg. And lots of cream and butter, plus cabbage and potatoes until they’re coming out your ears.

Lastly, it’s useful to know what quantity of a spice should go into a dish. Most spices and herbs you’ll usually want to use a teaspoon or two, or even a couple of tablespoons if it’s a flavor you like. However, there are some that are quite powerful and will take over a dish if you use more than ¼-1/2 tsp. Use just a little when you’re adding: cayenne, cloves, nutmeg, or sage. Rosemary can be pretty potent too.

Now, armed with this knowledge, it’s time to intrepidly head for the kitchen… 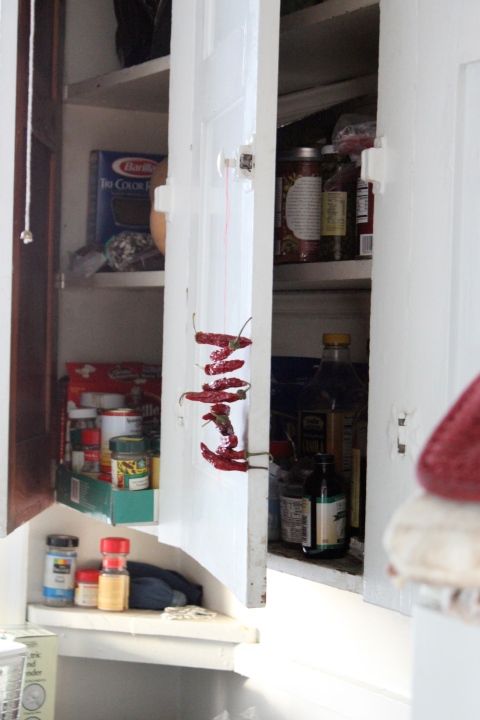 If you want to cook your own meals and have the flexibility to improvise with what you have (without constantly running to the grocery store, subservient to a specific list of the ingredients you need to make coq a la whatever) it does help to keep your kitchen stocked with at least some basics, so you have something to work with. It doesn’t take much, but it does take something. (A couple of pots, a frying pan, a roasting pan, a knife, a spatula, and a wooden spoon don’t hurt either!)

If I could only keep 5 extras (things to add to the main ingredient I’m cooking) on hand to enable my cooking from day to day, they would be: olive oil/butter, garlic, salt, pepper, and vinegar or lemon. Boom! That’s it. Working with those you can make pretty much any vegetable, meat, fish, or grain taste pretty darn edible. However, if you want to get a little more creative with your cooking, here are some more staples to keep around. Yes, as you read this list and your eyes grow wider and wider and then fall right out of your head, it looks like a lot of stuff. The truth of the matter is you kind of just have to take the hit your first go round of stocking up your kitchen. But once you have everything, I promise, cooking will be so much simpler and more inspiring, and most of these things will last you a good long while.

Here are the things I try always to have:

Pantry: onions, fresh garlic, fresh ginger (this finds its way to the fridge or freezer as I use it), balsamic vinegar, apple cider and/or sherry vinegar, olive oil, sesame oil, coconut oil, potatoes (or sweet potatoes, mmm), a bag of rice, a little pasta, a box of couscous (well, sometimes), canned tomatoes in abundance, chicken or vegetable stock (if it’s homemade stock it’s in the freezer), a couple of cans of fish (usually some salmon and some tuna. Sardines are also great – they get a bad rap, but I think they’re going to be the tuna of tomorrow), raisins (I’ve started to find golden raisins the most useful) and at least one other kind of dried fruit, flour, white and brown sugar, baking powder and soda, raw honey, a bag of brown lentils, a couple cans of chickpeas and other beans (usually black beans and red beans), other grains as desired (due to a weird quirk of digestion, I can’t actually eat them but other good options are quinoa, farro, cornmeal, oats, or bulgur wheat), a jar of spaghetti sauce, and a couple boxes of macaroni and cheese, just in case.

Refrigerator: butter, eggs, lemons, mustard, mayo, soy sauce, olives, anchovies (yes, really.  they’re so useful), real maple syrup, bread (this may be in the pantry instead), a couple kinds of cheese – parmesan and feta are especially useful for cooking but we like sharp cheddar and Jarlsberg for eating, plain yogurt, a jar of pre-chopped ginger (you can find these either in the produce or Asian cooking section of grocery stores, and it may be one of the handiest things in the world, like, better than sliced bread), peanut butter (almond butter is even better), 100% fruit raspberry jam (or homemade preserves from friends when we’re lucky), milk and cream, large quantities of assorted fruits and vegetables of choice.  These days Frances the sourdough starter hangs out in there too.  I think you’ll make do without a sourdough starter, though if you have one and want tips, just ask!

Freezer: frozen berries, assorted meats from the farm, frozen fish, pesto, mixed nuts, sometimes chopped frozen vegetables, and the desserts that I’m hiding from myself (this actually works for me, surprisingly), and homemade stocks when I have them.

And, here are some things that I don’t have as often, but always find myself wishing I did if I don’t: coconut milk, Thai curry pastes, chili garlic sauce (sriracha), fish sauce, rice vinegar, some sort of chutney, jars of sundried tomatoes and artichokes, capers, pine nuts, tomato paste, wine for cooking with, yeast, sour cream, molasses, more interesting spice blends such as garam masala, Chinese 5-spice powder, urfa biber, or Za-atar, and finally barbecue sauce, ketchup and Worcestershire sauce (I think these probably break my own rules for overly processed foods, but you know, sometimes…)

§ 14 Responses to Getting Down to Basics