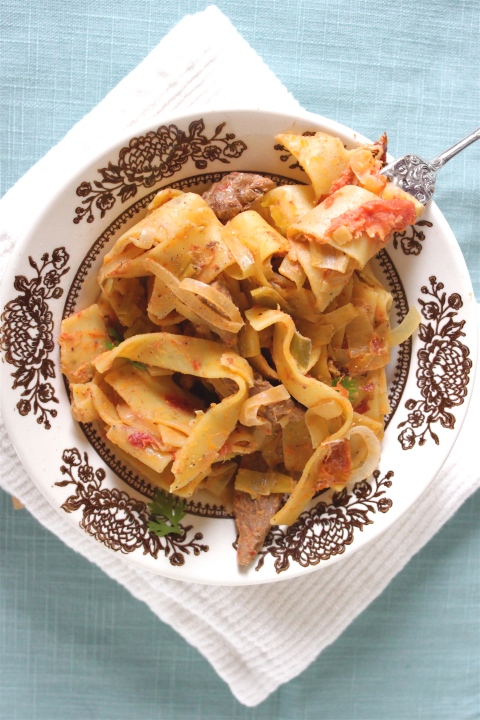 We were supposed to go strawberry picking this weekend.  We had planned to wander out to Western Massachusetts and stumble upon some nice rambling, rolling biking roads en route to the fields of our farm (okay, it’s not really our farm, it’s just the farm from which our CSA vegetable share comes, but I like to think of it as partly mine) where, the word on the street is that strawberries are exuberantly bursting forth left and right screaming, “Pick me!  Eat me!”  It was going to be a perfect Saturday…and then it was rainy.

Over the course of a leisurely Saturday morning of getting the bikes ready and such and so (prefaced by a week of saying daily, “I can’t wait to go strawberry picking on Saturday!”) I had worked myself up into my standard state of childlike overexcitement.  But then reality struck.  The sky started clouding over with ominous looking clouds, and the radio warned of impending rain and potential thunderstorms.  The omniscience of the Internet confirmed these unfortunate predictions.  There was a large storm to the west, already hovering over the farm and rolling it’s way here.

Grrrr.  I could feel my inner 5 year old reaching into its drawers to pull out and put on its cranky pants.  This was disappointment of the worst kind – a combination of disappointed hopes of fun with, even worse, food disappointment.  I had so looked forward to the ecstasy of plunking myself in a berry patch and filling both my belly and many, many baskets with juicy, red, sun warmed strawberry goodness.  The alternative that awaited us if we decided to hang out at home – that being, trying once and for all to organize the disaster that is our study/studio/spare room/junk accumulating magnet – was completely unappealing.  So, we decided that at the very least we would go biking anyway.  The rain wasn’t here yet, and maybe it would hold off just long enough to go for a ride.  We loaded up our bikes and headed over to our favorite bike route (through the gorgeous, pastoral, and ridiculously historic area around Concord, MA).  The day was looking gloomier and gloomier, and by the time we were strapping on our helmets, the sky had started spritzing.  And then it began to rain in earnest.  Buckets.  I looked over at Joel with the (now foolish seeming) statement I had made earlier echoing through my mind.  “Let’s go for a ride, even if it’s raining.”  He looked back at me.  Neither of us really wanted to go, but neither of us really wanted to give up on the idea either.  So, we plunged in.  Like doing a big, splashy cannonball into a lake.  At least, that’s about how wet we were within the first 5 minutes. 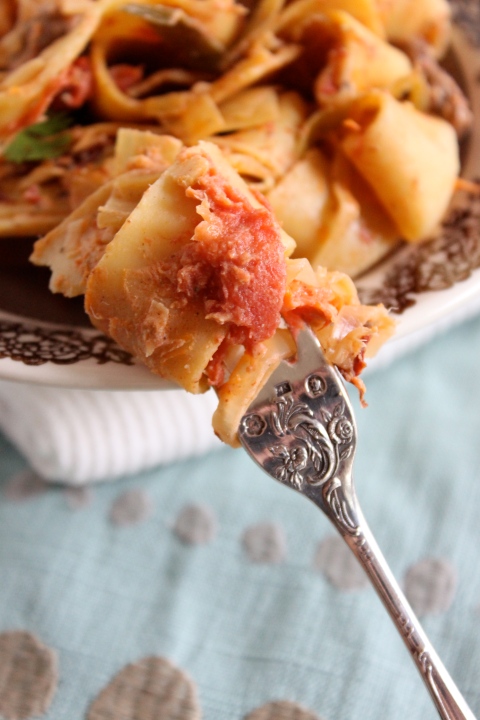 But, the thing about getting wet is, once you’re wet, you’re wet.  Once you’re there, you’re there.  So, you may as well have a little fun with it.  So we spun, and sloshed, and sprayed, and found ourselves grinning most of the time.  After all, a scraggly wet rat on a bicycle is a pretty funny thing.  And in a stroke of fabulous luck, we finished our ride just in time to slide into seats at the local pub, order beers, and watch the England vs. USA World Cup game.  We got home at exactly suppertime, still a little damp and cold, a little tired, a little hoarse from cheering, and rather hungry.  A look into the refrigerator revealed some steak, a leek, some tomatoes that I had roasted earlier because they were starting to look pretty sad hanging out on the counter, and some leftover crème fraiche.  In other words, the perfect makings of a roasted tomato cream sauce with little pieces of steak in it – like a stroganoff, but with no mushrooms (mmm, mushrooms).  Rich, hearty, creamy, warm, splendid.  Served atop pappardelle pasta it was a perfect finishing touch to what had turned out to be a perfect day. 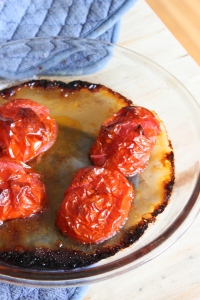 about 1 lb. of beef sirloin steak or tenderloin, or flank steak, cut across the grain into pretty thin pieces (somewhere between ¼ and ½ inch thick)

1-2 leeks (an onions or a couple of shallots would work just fine as well), cleaned and thinly sliced (only the white and light green part)

enough pasta to feed 4 (about 8-10 oz.), preferably of a thick variety like pappardelle or egg noodles

Preheat the oven to 450F.  Cut the tomatoes in half, and in a roasting or baking pan toss them with a little bit of olive oil, salt, and pepper, and then roast them in the oven for about 30 minutes, until their skin is blistering and darkened in spots.  Then remove from the oven.  You can start the rest of the dinner while the tomatoes are roasting.  In a large frying pan, heat a splash of olive oil over medium high heat, and sautee the pieces of beef until they are nicely browned (if the pieces are crowded in the pan, brown them in two batches).  Sprinkle them with a bit of salt and pepper as they cook.  Remove the meat to a plate and set aside.  In the meantime, put a pot of water on to boil for the pasta.  In the same frying pan as you used for the meat, heat another big splash of olive oil or butter, add the leeks and cook them on high for a couple of minutes.  Then turn the heat down to low and cook for about 10 minutes until the leeks caramelize.  Stir in the roasted tomatoes, using a spatula to break the tomatoes apart.  Then, stir in the crème fraiche/sour cream, and the beef.  Add salt and pepper to taste, and a sploosh of wine (red or white!) or sherry if you have some.  You could also sprinkle in a little thyme (or thyme pesto, yum yum!) if you wish.  Cook the pasta in the water, which is hopefully boiling by this point, until it is al dente.  Toss the pasta with the sauce, and serve.

§ 7 Responses to Pasta with steak and roasted tomato cream sauce

You are currently reading Pasta with steak and roasted tomato cream sauce at Five And Spice.