All through our childhoods, my brothers and I were only allowed candy on Saturdays – lørdags godt, “Saturday treat.”  Each Saturday we were given our allowance, to drop into the cleaned out yogurt containers that functioned as piggybanks, plus a quarter (adjusted up over the years to a dollar, a parent does have to recognize inflation), to clasp hot and sticky in our hands as we ran to the store to spend it on any candy of our choosing.

We had a complete free market phenomenon going on with our Saturday treat allotment, and (without remotely having the terminology to talk about it) we became very shrewd at calculating the relative utility of each variety of candy as compared to its cost, in order to determine how we could best balance the quantity versus quality of our purchases.

My brothers erred on the side of quantity.  My indifference curves must have been steeper because I tended to buy exactly the candy I preferred at the time, even if it meant I wouldn’t walk away with pockets bulging.

I remember an intense Mambo phase.  Do you remember those?  Fruit-flavored chews in a similar genre to Starbursts, but ever so much better. For a long time I also harbored a strong preference for Sour Patch kids.  But, as I grew older (and our financial allocation closed in  on a dollar), I – being female, and all – developed a powerful love of chocolate.  I recall many sweet, melty Saturdays of peanut butter cups or Three Musketeers Bars. 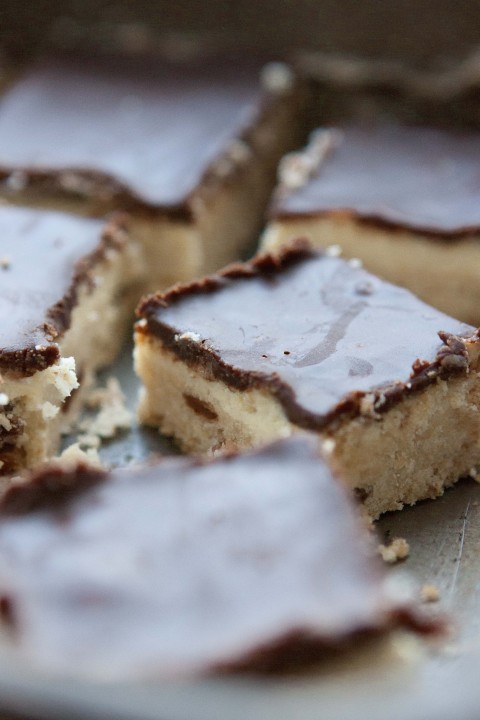 END_OF_DOCUMENT_TOKEN_TO_BE_REPLACED

I have a deep seated love for coconut macaroons. To the degree that it probably seems a little wacky from the outside.  For example, I’m pretty sure that when I look at a coconut macaroon I get that doe-eyed look that an adoring puppy gives to her master or mistress, I love macaroons that much.  They’re a sort of edible security blanket for me, and when I eat one I am bathed in a sense of well-being, an internal lightness… Yeah, it definitely seems a little wacky.  But, lest you judge, I actually have a quasi-rational reason for feeling this way about macaroons.  You see, (and this may be too much information but it’s too late now because I feel the need to explain myself!) I have a wonky digestive disorder that occasionally  leaves me doubled over with stabbing pain in my gut.

The most frustrating thing about it is the sense that your body is rebelling against you.  That you can have seemingly done everything right to care for it and even so the pain will flare up now and then for no apparent reason, leaving you clenching your teeth, fighting back tears, and feeling helpless.  It’s the type of thing that leaves you feeling completely out of control.   And that is something that we as a species don’t seem to like much.  It’s in those moments that we search for talismans or rites, things that we imbue with powers that will allow us to feel we’re in control of the situation, even though we aren’t.  You know, rabbit’s feet, lucky socks, throwing salt over your shoulder, those sorts of things.

Now, a couple of years ago I heard from a little bird that they had read on the internet that coconut can help with digestive issues.  Disclaimer: the internet is not a trustworthy source about these types of things and you can’t just believe medical advice that you read there.  However, in a moment of feeling desperate, I decided to try it.  On my next bad day, I bought and ate a coconut macaroon, and lo and behold within about a half hour it felt as though my intestines suddenly got over their red-faced angry tantrum and simply relaxed.  They unwound.

Some of it may have been the coconut.  Some of it was probably a placebo effect.  I didn’t particularly care.  The placebo effect can give you real results, so if you can use it to your advantage, why not?!  Anyhow, coconut macaroons became my emergency parachute, and I fell in love with them.

They’re easy little treats to fall in love with, whether or not they make you feel better, what with their crunchy exterior and velvety interior and the powerful flavor of coconut lacing every bite.  I also realized after about the 3rd time I ate one that they tasted remarkably like Gjende Kjeks, these delicate, crispy-soft cookies imprinted with a reindeer that we used to eat in Norway when I was little.  A little dose of nostalgia never fails to add to the psychologically therapeutic properties of a food.

END_OF_DOCUMENT_TOKEN_TO_BE_REPLACED

You are currently browsing entries tagged with coconut at Five And Spice.