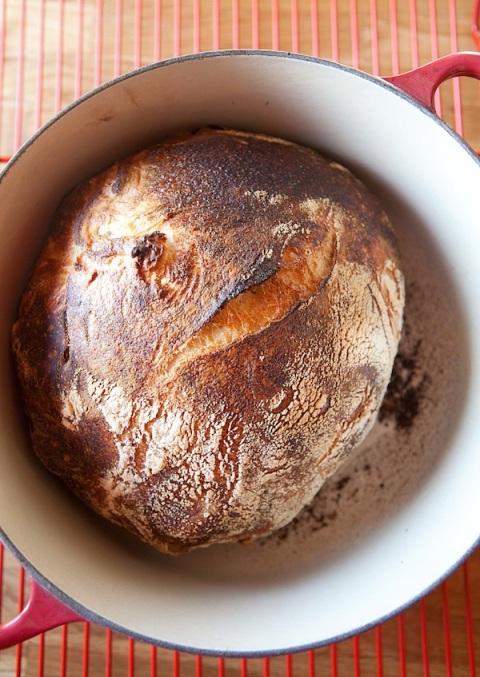 Hello dear people!  We’re just back from Denver.  Did I even mention we were going to Denver?  I don’t think I did.  There were more important things to talk about!  But, in spite of the lack of public acknowledgment, that is, in fact, where we were for the last week.  We were at a distilling conference, which, as you may suspect, is a whole lot cooler than many of the conferences one could find oneself attending.

Craft distillers are a pretty good bunch, as far as I could tell from my observations of the 600 or 700 or so that were at the conference with us.  Quirky, driven, creative, Jacks and Jills of all trades, and quite friendly besides the occasional curmudgeon – there always has to be at least one curmudgeon in any bunch.

I didn’t make a ton of connections.  I’m an absolutely terrible networker!  I clam up and get shy and awkward and can’t think of a thing to say to anybody, so I float off around the edges and watch people talk.  But, there were some smaller, more intimate gatherings where I could actually connect with people and those people I found to be stellar ones!  Also, the sessions were generally useful and fascinating.  We learned about variables in aging spirits, how to work with wholesalers, innovations in packaging, women in distilling, surviving an audit, how to “nose” (that is to say, smell) unwanted compounds in your spirits.  Good stuff.

Now we’re back and the refrigerator is starkly empty.  I need to do a major restock.  And I need to bake some bread.

As much as possible, I’ve been trying to bake all of our bread at home.  Which sounds like some sort of half super-hero, half Ma on the prairie type of domestic prowess.  But, I’ve found that there are so many recipes for low maintenance loaves out there, that baking one a week isn’t all that great of a commitment.  And the payoff is huge.  (Mostly.  Sometimes my loaves totally flop.  Those are sad days.)  Plus, it means we deeply savor every bite of bread.  (I usually only have one slice a day so the bread lasts through the week.  Joel always accuses me of bread rationing.)

I adore good bread.  I can completely understand how civilizations could be built on bread and why it is a metaphor for life, for spirit, for giving, for abundance.  So, it makes me terribly sad to know that more and more people can’t eat bread, and that bread in the way it’s commercially produced these days is not very good for us at all.  It’s a tragedy really.  What are we if bread no longer makes sense in the context of “the bread of life” or “our daily bread?”

I’m no expert, but from what I’ve read, I suspect the reasons for this change in bread are complex and many.  Part of it, I am quite convinced, comes from the changes in the grain supply with the industrialization of agriculture.  The wheat available today is not the wheat people ate for hundreds of years.  The wheat available to us now has been bred to be durable, shippable, highly storable, easy to harvest, and high-yield, but not to be nutritious or flavorful.  The potential goodness of the grain has been bred right out of it, leaving instead a highly gluten-filled, hard to digest, inflammatory commodity.

Knowing this, I’ve started to become really obsessed with heritage grains.  I won’t bore you with all the effusiveness of my obsession, but I will say, there are farmers around the country that have returned to growing old versions of grains – soft wheats and ryes and barleys, ancient grains from the fertile crescent or the grains that were used by pilgrims and pioneers.  If you can find these grains, buy them.  Support the efforts of these farmers!  Heritage vegetables and meats have become a fairly widely recognized and desirable thing, leading farmers to raise more of them.  I would hope the same could happen with heritage grains.  It’s more expensive, sure.  And I understand it’s definitely not possible for everyone right now.  But if you can, then why the heck not, right?!  (I’ve fallen in love with the flours from Anson Mills, but there are also places where you can get unmilled grains, and I’ve even heard about grain CSAs)

The other thing I’ve heard about is the problem with commercial yeast.  I haven’t looked into this as much as I really ought, so I don’t know in depth exactly why commercial yeast is less healthy, but I’ve long known that baking with wild yeasts (ie. a sourdough starter) breaks down proteins in the grains that releases more nutrients and makes them all more accessible and digestible.  Sourdough (real sourdough, a lot of commercial sourdough is just commercial yeast raised bread with vinegar added to make it sour) that has gone through a slow-rise is actually pretty low in gluten as well!  These, essentially, are the reasons why I started trying to bake all of our bread, after acquiring Frances, my sourdough starter. 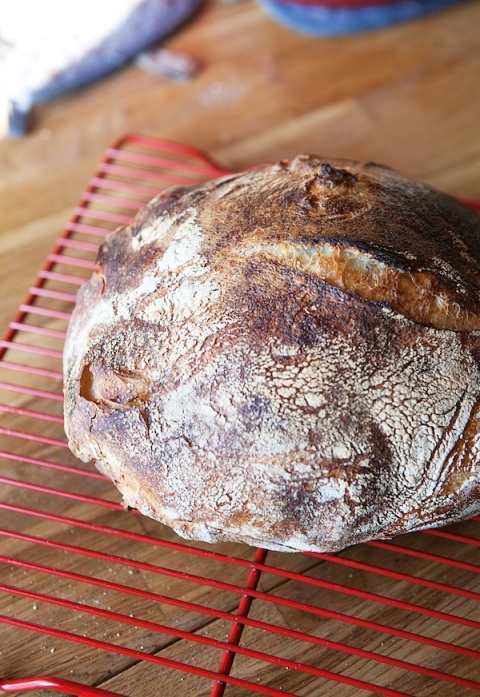 It took us a while to get comfortable with each other, Frances and me.  I did a bunch of reading on how to maintain a sourdough starter (here is a good tutorial, and here is another one), and I gradually learned the schedule on which Frances needed to be fed if I kept her in the fridge most of the time.  And then I started to read books on bread baking like it was my job.  But, even following the instructions to the letter for the wild yeast breads in some of these books, I wasn’t quite getting the results I wanted.  Probably because I had some very particular wants.  I was looking for a bread with large air pockets, a lightly tangy and elastic (not crumbly or dense) crumb, and a crisp, hard, crackling crust.  Not really the best sandwich bread perhaps, since sandwiches tend to be better on bread with a tighter crumb, but I knew what I wanted.

So, I kept experimenting and nabbing techniques from different books.  It’s taken at least a year and hundreds of loaves (almost all of which were quite good, so there was nothing lost in the effort.  But they weren’t perfect.), but last week in my efforts, I made a bread that was pretty dang close to 100% hydration (that is, equal weights of flour and water), and used a slow rise combined with a technique I’ve only recently discovered, of stretching and folding rather than any kneading.  I baked the bread in my Dutch oven, and when it came out, well actually when it came out it was quite stuck in the Dutch oven and I was feeling too impatient and I tried to pry it out, so I kind of ripped some chunks off of it and broke a wooden spoon in the process.  Unnecessarily, since it would have loosened up and come out by itself if I’d waited five or ten minutes.  But, when it had cooled enough to eat with a good smear of butter, I discovered it was perfect.  It was truly my perfect crusty loaf.  Joel declared it world class.

I was worried it was a fluke.  So, since getting home yesterday, I immediately set some dough to rise to try it again.  I just took the loaf out of the oven and people, it is gorgeous. Gorgeous!  Whee!  I’m so excited for lunch now!

Anyhow, I can’t actually promise this technique will work for anyone else.  I think bread baking may be a very personal thing.  There’s a certain amount of relationship building that has to happen between you and the sourdough and the bread so that you can understand it and tell when it needs more or less moisture or more or less time.  But, I thought I’d give you my formula anyways, so you can give it a try.  If it works, you are in for a treat. 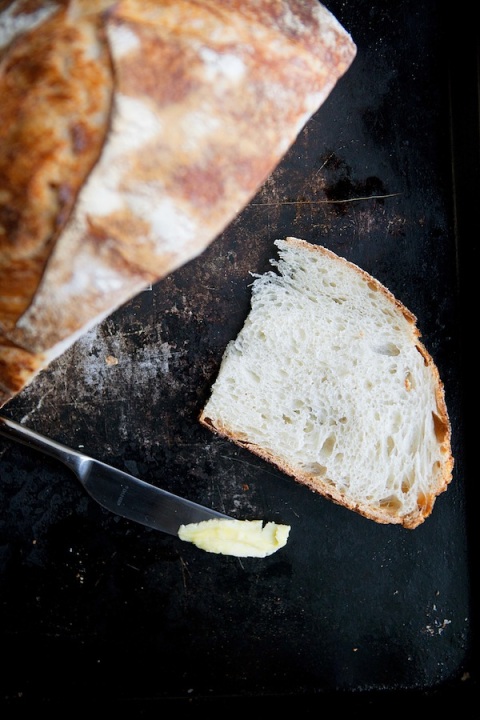 I use a pretty large amount of sourdough starter in this loaf.  Using more starter makes for a slightly faster rise and a more lightly tangy flavor.  If you want a really tangy flavor, you can use less starter and let it rise for a longer time.  All of the measures for the bread are by weights.  If you’re going to bake bread, you should really do it by weight.  I still use cup measures for most baking I do, but for bread, since it’s all about weight ratios, you really want a scale.  I’ve given cup equivalents, but I make no guarantees about them!

*The weather here has been bone dry when I’ve been making this.  It has suddenly been getting much more humid, and I’ve been finding I need to add around 50 g extra of flour to the dough to get the texture I’m looking for.

§ 24 Responses to My perfect crusty loaf

You are currently reading My perfect crusty loaf at Five And Spice.