Breakfast arepas with egg and avocado 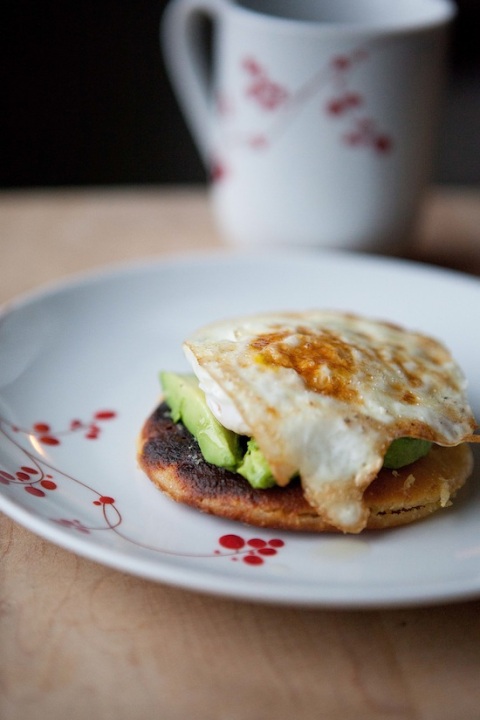 When I came up with the idea of making breakfast arepas, I felt extremely innovative.

I was first introduced to arepas several years ago in Boston by a friend of mine who excels in the sniffing-out-cheap-but-good-street-food department.  I enjoyed the golden cheese-filled corn cakes a lot – it’s hard not to like warm cheesy corny stuff – but they didn’t excite me to the degree many other street foods (did somebody say kimchi tacos?) do.

Why?  Probably because, for unknown reasons and a shameful lack of imagination on this front, it took me until just days ago to realize that you could stuff an arepa with more than just cheese or cheese and beans.  So much more! 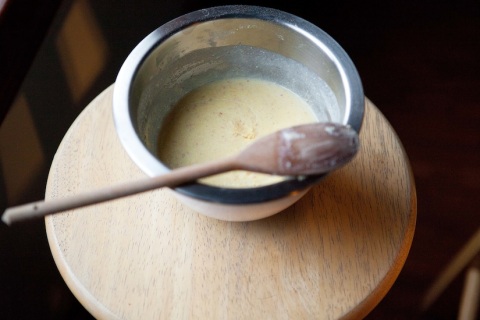 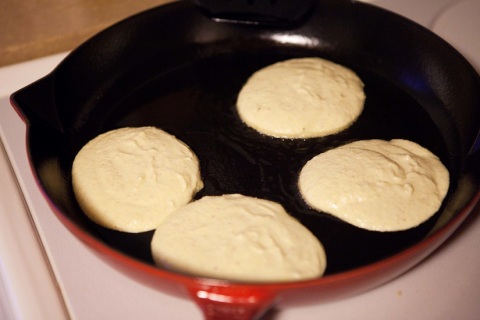 Then, last night I was texting with my brother who lives in Manhattan (he has power back!  Yay!  I hope everyone else still without power also has it restored ever so quickly!) who had written to me to tell me that I really needed to try making a bourbon and maple syrup milkshake.  (Um, yes, clearly I do.)  Somehow it came up that he had eaten an arepa for dinner, and I told him excitedly, “guess what! I’m making breakfast arepas tomorrow morning!” 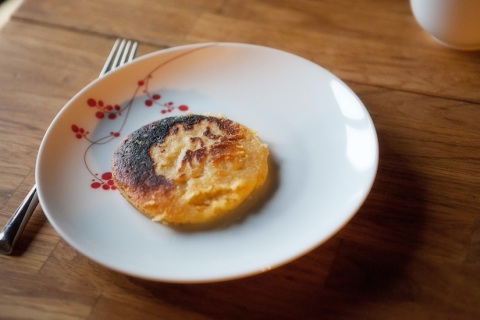 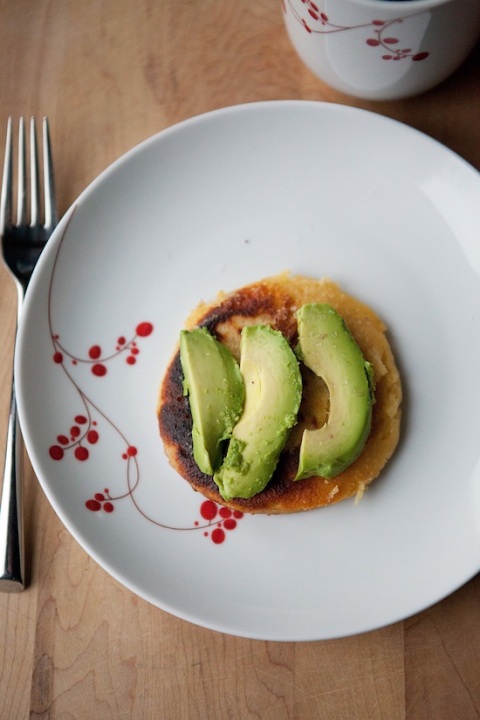 “Seems like a natural extension of the breakfast burrito,” he replied.

Doh!  Of course it was.  My innovation wasn’t much of an innovation at all.  It was an extremely easy and relatively minor step forward from my love of all things breakfast burrito, breakfast taco, or breakfast quesadilla (again excuses to eat eggs and avocados together.  Sour cream and salsa in the morning don’t hurt either, in my opinion.).

But hey, a step is a step, and I feel no less excited about my awesome new breakfast option.  And, while it seems much fancier and from-scratchier than a breakfast burrito because you’re making the arepas yourself (well, unless you were making your own tortillas, in which case they’d be about even in the from-scratchiness category), they are just about as easy because arepas are relatively straight forward to through together. 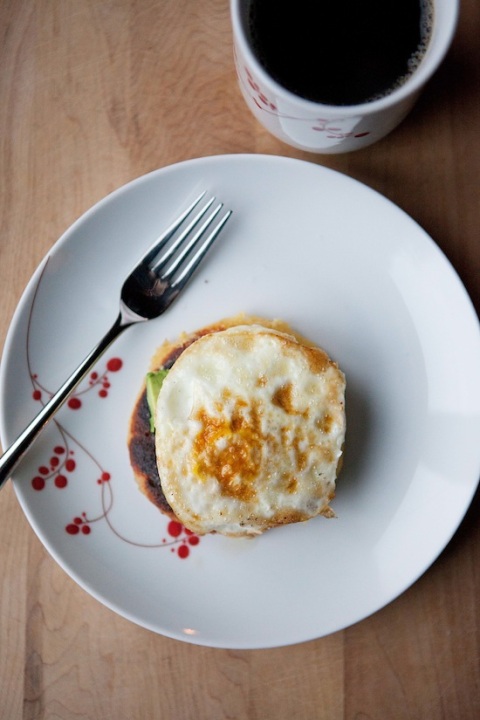 I say relatively because I made my arepa dough using a simplified version of this recipe from the Minimalist since it called for cornmeal not special arepa flour, and at first it did not work at all.  Making it not remotely easy to make arepas!  The dough did not thicken past being batter-like, so instead of forming dough balls and flattening them, I tried dropping batter into the pan like pancakes, and let me tell you, I have never had something stick to a well-greased pan like those corn cakes did.  There was no getting them to loosen their iron grip on the skillet in order to flip them without some serious muscle on my part.

So, to the remaining batter I added more cornmeal until it was thick enough to pat into patties, and from there I had no problems.  Lesson learned, I guess.  Thenceforth it was easy peasy.

Now, I kept my filling relatively simple, just sliced avocado, a fried egg each, plus a drizzle of sour cream mixed with chopped chipotle in adobo sauce because I happened to have it.  If I hadn’t had the chipotle, I probably would have used salsa.  If I’d had lime or cilantro, I might have added a bit of those, and bacon certainly wouldn’t have been out of place either.  But, mostly I cared about the silky avocado and the egg with crispy edges and runny yolk both piled delightfully atop the arepas, whose outsides are golden and cooked a bit like tortilla chips and the insides cushiony and sweet like creamy polenta.  (It would have been more proper to split the arepas open and put the egg and avocado in between to be eaten like a sandwich.  But, I decided to go open face so I could just pile stuff on.  I blame my Nordic heritage and my affection for the smørrebrød.) 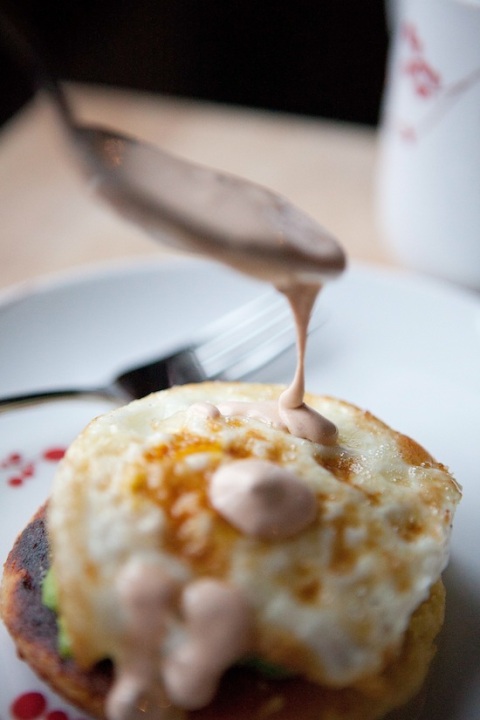 I have a feeling these bad boys are going to be habit forming.

The arepa dough needs to rest for at least fifteen minutes, and they take about ten minutes to fry, so this may not be speedy enough for a weekday breakfast.  But, on a weekend (especially, for example, a Sunday where you suddenly find yourself with an extra hour, ahem, ahem), they’re no trickier than a simple pancake batter, and easier – in my opinion – than something like French toast or biscuits.

Plus, if you have leftover arepas, then you can quickly toast them and fill them for weekday breakfasts.  Or tuck in a bit of meat and cheese, or vegetables, or beans, and have yourself a meal any time of day.  It’s not a major innovation, but it’s a good one. 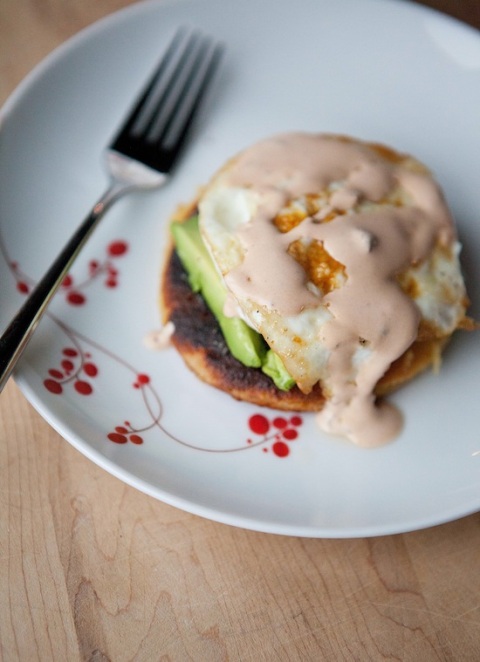 § 21 Responses to Breakfast arepas with egg and avocado

You are currently reading Breakfast arepas with egg and avocado at Five And Spice.