Chive pancakes (that is, scallion pancakes with chives instead) 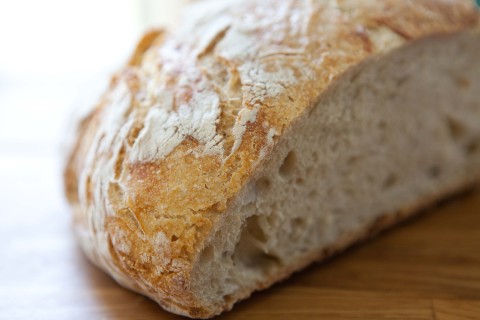 Life is grand friends.  Really grand.  I can’t stop beaming with pride from every cell of my body, and it’s because of this.

It’s a sourdough loaf.  It’s the little things, you know.  Isn’t she a beauty?  Perfectly crackly hard shell of a crust, spongey chewy interior crumb, those lovely blistered gashes and bits of charred flour.  I would shell out good money for a loaf like this, wrapped nicely in brown paper, at a bakery.  But I made it myself!(!!!) And I am fit to burst with how excited I am about it.

It came out of the oven just after 11 last night because that’s when it appeared ready to bake, and well, I haven’t stopped smiling goofily about it since. 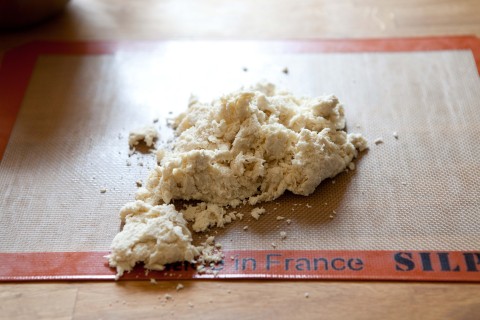 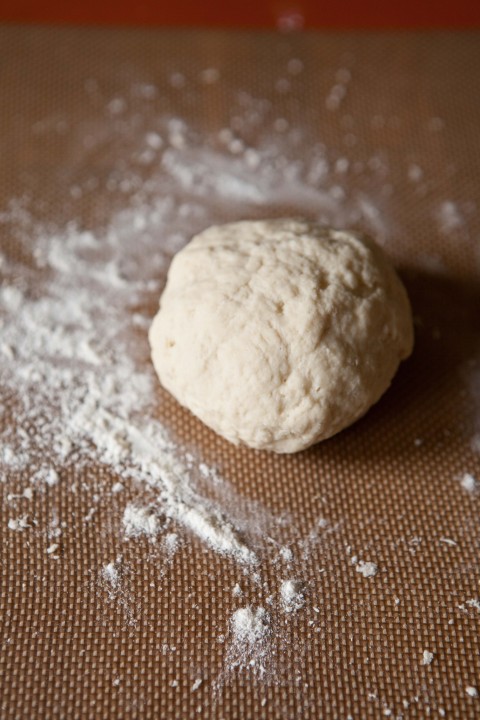 I’d share a recipe but I don’t exactly have one.  I’m not entirely certain what I did to make such a lovely loaf.  Sooo, I can’t really claim bragging rights for my careful planning and execution.  I’ve been making yeasted breads for a while, and sourdough breads for a much shorter while, and this is the first time I’ve been so happy with the results.

Several months ago, I got some sourdough starter from our department’s head statistician.  Yes, our head statistician keeps a sourdough culture.  He also, apparently, has an amazing commercial kitchen range.  So, let that teach you not to make assumptions about statisticians, I guess.

Anyhow, the starter (her name is Frances, FYI) and I have had a tumultuous relationship thus far.  I would nervously use her in simple recipes like crepes or pancakes, and she would give them a pleasant tang.  I would break her out for a recipe that called for a real rise, and she would lumber along, taking her sweet time to produce any bubbles at all, creating breads that looked more like flatbreads than the dramatically risen domes that I dreamed of.  Then I would forget to feed her for a little too long and she would dramatically cry “woe is me,” in yeast language, which is to say, she would go all acetone-stink on me, and I’d have to triage her for a few days.

Last week I baked a no knead sourdough loaf with her after an intensive bout of restoring her to good health after my neglect.  The flavor was great, but the loaf was still shallow and slightly too dense.  As if the starter didn’t have quite enough material to work with or had risen too long and started to sink down again.  So, this time I added a bit of extra flour here and cut down on some of the rising time there, and…magic!

After we’ve finished this loaf I’ll have another go, and if I’m successful again, then I’ll declare myself a master of yeast cultures and bake us mountains upon mountains of bread forevermore.

My mother can coax nearly any flower out of the ground and into a gorgeous blossoming beauty.  Vegetables, at least when I was little, were another matter.  Nary a carrot nor tomato could be made to grow to an edible size in our yard.  But, we always had a sprawling rhubarb plant and prolific rows of chives.  So, I love chives for the memories that waft up along with their grassy, oniony scent, of standing barefoot in the garden, snipping a handful of them and running with them into the kitchen where they would be added to something delicious.  Usually scrambled eggs.

Chives just make me happy.  Simple as that.

I decided to put my happy green strands of allium to honorable use in a version of scallion pancakes.  The basic recipe for these pancakes is from Mrs. Larkin, also known as the Pound Ridge Scone Lady (what a title!  I’m completely jealous.).  We’re in the hands of an expert baker with this recipe, friends, and as soon as you start working it, you can tell.  She is precise, straightforward, she marshalls and coaches and guides you through the process, all with a gentle touch. 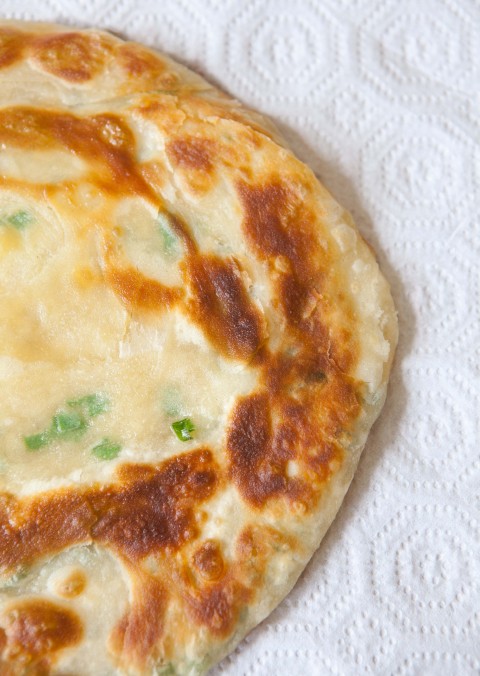 It turns out the key to scallion pancakes is fat.  Given their flakiness and the grease stains they leave behind on your napkin, this should really come as no surprise at all.  Having made them, I’m now dubbing them a sort of Korean version of a croissant.  You spread the dough with a soft layer of fat that gets rolled and folded in several times, similar to croissant making. The magic happens as the fat melts and gives off steam resulting in a pastry that has soft, airy layers and a crisp exterior.  They’re, ahem, about as healthy as a croissant too.

Mrs. Larkin has you use either lard or shortening, but I had none, and I also had no patience for waiting to try these until I had some.  So, I made a completely un-Asian substitution and used butter.  Salted butter.  This plus using chives instead of scallions resulted in a bastardized quasi-Scandinavian-Franco-Asian treat that was utterly, stupendously delectable.

I’ve liked scallion pancakes every time I’ve had them, but I’ve never felt the devotion to them that I’ve seen many of my friends express.  The chive and butter version?  Oh yeah.  I’m devoted.  Butter gets me every time.  Have I mentioned that my grandmother thinks I was a dairy maid in a past life?  I had a similar experience with pie crust.  While lard may give you the very airiest, flakiest crust, the flavor of butter is unbeatable.  And, if I have to choose, I go with flavor over texture any time.  But, butter can give you amazing flakes.  So, you don’t have to choose!

These pancakes, while they should be reserved as a special treat given they’re schmeared with fat and fried in a good deal more, are quite simple to whip together.  And really fun.  There are numerous little steps that involve rolling the dough into a circle, then into a roll, then into a snail, and then rolling it flat again.  I take great delight in processes like these, and in witnessing the metamorphosis of the dough from one phase to the next, first springy, then supple and smooth, then studded with green bumps.

I used much less oil (and actually, I used ghee instead of oil) for frying them than a half inch in the pan, and they still developed nice mottled brown splotches.  I’m also musing about what it would be like to brush them lightly with just a little more butter and then bake them instead.  Next time.  First it’s back to tackling the sourdough.

§ 18 Responses to Chive pancakes (that is, scallion pancakes with chives instead)

You are currently reading Chive pancakes (that is, scallion pancakes with chives instead) at Five And Spice.