The other day as I sat staring down at my long scratchy to-do list, I suddenly saw it transform before my eyes, distinctly and unmistakeably, into a lamprey, writhing on the page and viciously sucking all the life out of my day.  Gruesome.  And, I knew at once that the image was completely accurate.  I’ve been living off of my to-do list lately.  Actually, it is more like I have been possessed by my to-do list, a drone under its command.

The list consists of winding pages of the endless tasks that ought to be taken care of in between the meetings and duties that create rows of blocks in my calendar, like the bricks of a parapet.  The fact of the matter is, there are things that must get done, and better to list them out than try to keep them sorted and ordered in my poor, addled brain.  But, lately I’ve let the list get to me.  The magnitude of it, and my brain-numbed reliance on it, have left me feeling empty.  It takes over my mind even during the moments I’m trying to let go and recharge.  And that’s where the trouble comes from.

When I wake up, I feel that brief wondrous moment of expansiveness that the morning brings.  Here is the day!  It is filled with possibility!  For two seconds.  Then the list comes thundering down on my head.  It shutters and boards up anything that looks remotely like possibility and replaces them with a sense of floundering and stress.  Feelings that don’t get you anywhere.

The things that must be done must be done.  That’s the way of things.  But I think living only by those and with no sense of space for all the additional possibilities, being distracted by those things in every moment rather than seeing and feeling what is really there, well that is not living.  And, I’ve decided I won’t stand for it! (I say this now knowing full well I’ll have to keep reasserting it over and over throughout my life whenever I remember.  Tricky, tricky life.  It’s a practice, I guess!)

It’s not always easy to pull yourself back into reality when there are so many things going on.  Stress makes you a little high, it makes you feel a little important.  But, it’s not real, and what you need is something that is small and simple and very, very real to remind you to come back to yourself.  I didn’t expect it (I’m a breakfast person), but last week I discovered what I needed in brunch.

A friend of ours came to visit for Sunday brunch, and perhaps it was partly due to the quiet and affable nature of his presence, but there was also something about dedicating a good half of the day to sitting in the presence of companions, sipping coffee as slowly as possible, and watching eggs bake in the oven, seeing in technicolor how transformative a process like baking is, that soothed me in a way that I haven’t allowed all my recent attempts at journaling and yoga and meditation to do.

The tranquility took me by surprise, I think, and I was able to sit back into it.  There is something about brunch that quietly but powerfully demands that you take it easy.  Brunch shushes all the frantic to-dos and assures them that they really can take a break for a bit.  “The day has exactly as much time as it has, and a frenzy won’t give you any extra,” it says, pouring you another cup of coffee and passing the eggs.  I plan to invite brunch back again this weekend.  I may even cook the same thing. 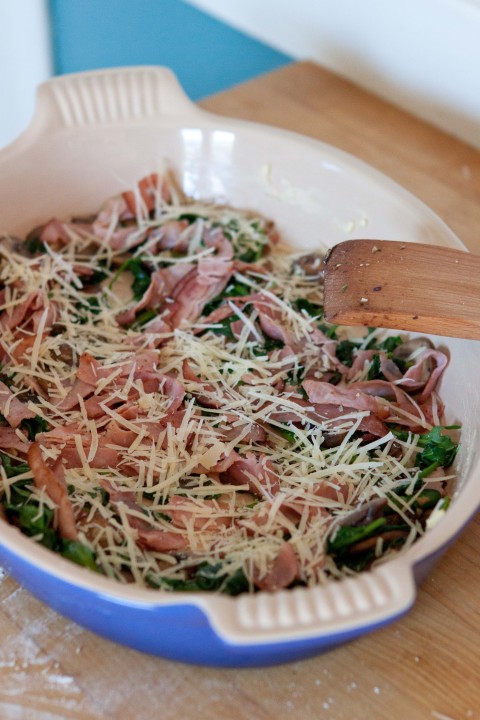 I’m enamored of baked eggs for breakfast or brunch right now.  They give you all the same add-in options of vegetables, meats, and cheeses as making an omelet, but without the fuss of beating and folding.  And, I think they look darling, each little egg, the bright yolk within a ring of white, nestled amongst the greens or tomatoes, or whatever your whim has bid you to put in the dish.

Last weekend, I sauteed mushrooms and a little garlic together, then wilted in some greens.  Over the vegetables, I sprinkled crisply browned pieces of salty ham and just a tad of Asiago cheese, both of these giving the dish full, salty, almost nutty flavors.  After the eggs are gently cracked into the baking pan, I like to drizzle a tiny rivulet of heavy cream about.  As the eggs bake, the cream thickens into an unctuous sauce, just rich enough to make your meal feel brunch-ily indulgent, but not so heavy that you wind up with what I call ‘brunch gut’, that leaden feeling you get from eating French toast, coffee cake, an omelet, and far too much coffee, all in one sitting.  I try to keep my brunches about the same size as any other meal I would make.

I had also just made homemade ricotta (this always helps me to feel a little more earthy and grounded, I mean, you’re making cheese, that’s pretty darn real, right? Plus, it takes all of five minutes.), so I decided to whip up a quick batch of biscuits to spoon it onto and to keep our eggs company.  I figured I’d use Heidi’s recipe for yogurt biscuits from Super Natural Everyday because I had heard good things.  All rumors were confirmed.  The biscuits are buttery, with a hint of tang and a pleasantly workable dough from the thick Greek yogurt.  And they are flakey to the power of flake!

Heidi cleverly has you use a technique similar to what you would do in making puff pastry or croissants. I want to say it’s called lacquering the dough, but please don’t quote me on that.  Aha! I have just been informed that the word is laminating.  I knew it started with an L, but I was having total anomia otherwise.  Anyway, you roll the dough out several times, each time cutting it in half, stacking one half atop the other and rolling it again.  This creates those marvelously light, pull-apartable layers that everyone’s fantasy biscuit has.  Just make sure to use as little flour as possible when rolling them out, and to match the top of the dough with the top of the dough when stacking, so the layers aren’t too floury to roll back into each other.

Feeling I had time to sense the frailty of eggshells and the heft of dough under my fingers, smelling the garlic sizzling and the coffee brewing, finally made me feel awake again after a week on list autopilot.  This week has been another hectic one, so even though I have plenty of work to get done over the weekend, I’ve carved out the mornings for letting go (even if I have to force myself) and focusing only on sipping that coffee as slowly as possible.

Greek Yogurt Biscuits (adapted from Super Natural Every Day by Heidi Swanson) (makes 12 biscuits, I actually halved the recipe to make 6, and that worked fine)

You are currently reading Baked eggs and yogurt biscuits at Five And Spice.