Parsnips and dates with tahini-yogurt

I am going to start by saying that as a general rule, it is not a good idea to substitute ingredients for one another based on color.  At least, don’t do it all willy-nilly.  Sure, sweet potato bits can stand in for cubed butternut squash pretty well, and many leafy greens are swingers, changing partners and taking one anothers’ places at will.

But, you may not always get that lucky.  At least some small morsel of thought is required.

A cautionary tale: one of my very dearest friends lived along with my self and eight other fairly hapless souls in a large, elegantly dilapidated house on the edge of campus our junior year of college.  We all shared a kitchen and subjected each other to our culinary experiments, and dirty dishes, at will.  My lovely friend (who is now an excellent cook, so let that be a lesson in perseverance) produced a wide variety of extremely, um, innovative foods, many of which were about as edible as a chocolate truffle rolled in glass shards.

And, she had not yet learned the principles of substitution.  So, one day when she decided to make pumpernickel bread, upon discovering that we were plum out of molasses, she decided to use vanilla extract instead because, as she told us later, it was the same color. (You saw that one coming, didn’t you?)  1/4 cup of vanilla extract.  The cheap variety that someone had brought back from a study abroad in Mexico.  It wasn’t pretty.  And by pretty, I mean edible, because it was the proper dark brown color.

I had that memory at the forefront of my mind as I contemplated the potential merits and problems of substituting parsnips for cauliflower.  Would it work?  They’re used in many similar ways.  Context is important. 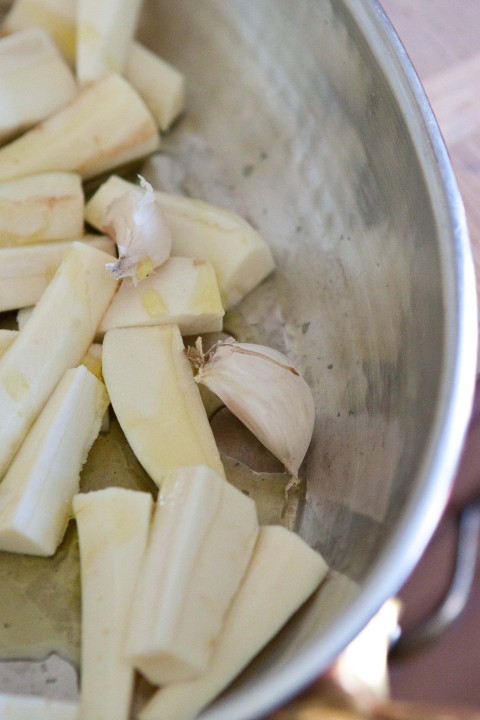 I was thinking about pulling this little switcheroo on a Middle Eastern dish mentioned in my flavor thesaurus, which I am still happily going to bed with every night, thanks for asking.  She mentions making a sort of warm salad of cauliflower, dates, and walnut oil.  But, something in me wanted parsnips instead.

I can’t eat walnut oil anyway, so following the suggestion to the letter was off the table from the start.  And that leaves only following the spirit of the suggestion, which I deemed to be nutty-earthy combined with super saturated date sweetness.  (I can never believe that dates aren’t actually some man-made sugar soaked paste.  How?  How can they possibly be that sweet?  But, ours not to wonder why…)

Now, cauliflower has a vaguely mustardy sulpherousness to its nutty flavor, a friendly reminder that it is from the cabbage family, after all.  (As Mark Twain said, “cauliflower is just cabbage with a college education.”)  Parsnips, on the other hand, are sweeter with a little bit of peppery spice.  So, it’s definitely a square hole versus a round hole type of situation, but the thing is, if your peg is small, it will fit through either shaped hole.  And, I thought the dates would amiably coax out some of the savory side of either vegetable while simultaneously complimenting the sweet.

I’m also pretty sure I’ve seen the combination of parsnips and dates somewhere, I have a mental image of it at any rate, which further boosted my confidence in the pairing.  I’m happy to say, I was right.  Roasting the parsnips with generous amounts of olive oil and salt, and tossing in the dates toward the end gives you a dish with the irresistible sweet-savory elements of salted caramel, but with the heft of any root vegetable side. 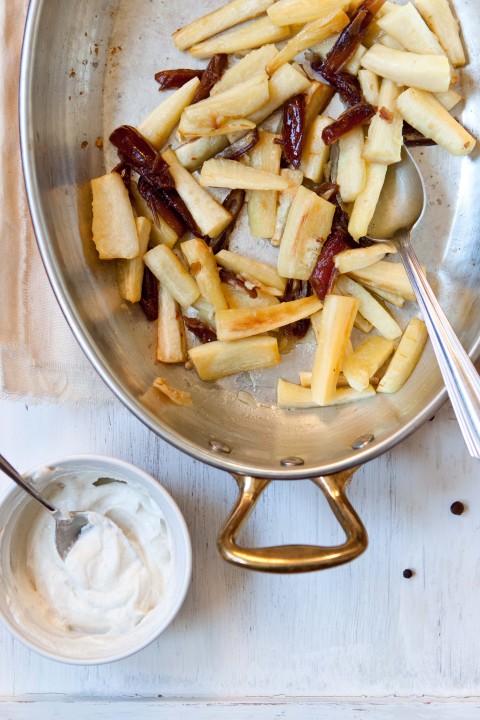 I roasted garlic cloves alongside the parsnips until they were downy-soft and richly savory.  Then I smashed them with some lemon juice to make a sort of dressing to drizzle over the roots and fruits.  (Yes, I seem to be adding a bit of lemon to everything these days.  This is because first, fresh lemon is wonderful; second, its brightness could wake up a hungover college student after the end of finals; third, it is citrus season and all, so I feel it is my duty, and my excuse.)

Finally, I seem to operate under the assumption that no Middle Eastern-ish dish is complete without some sort of yogurt sauce on the side.  It’s not a bad assumption on the whole, so I mixed up some yogurt with tahini, which adds a mouth coating toasty nutty flavor, and a pinch of cumin.

I was happy to eat just this for lunch.  Twice in a row.  If I could eat salted almonds, I would have added a smattering of those as well, I think.  I’m also angling to try this as a side dish for some spicy Merguez sausage, or perhaps a roasted chicken rubbed with paprika.  Or maybe I will give it a try with the original cauliflower that was called for.  I know it would at least be the same color…

Parsnips and Dates with Tahini-Yogurt (serves 4)

§ 24 Responses to Parsnips and dates with tahini-yogurt

You are currently reading Parsnips and dates with tahini-yogurt at Five And Spice.