What would you do if you weren’t afraid of failing?

It’s not an original question, I’ll admit.  Quite the contrary, in fact.  It’s pretty painfully cheesy, like those horrible motivational posters we used to have in our gym locker rooms for high school sports, or the quotes I carefully wrote into my journals, in metallic pens and with cutesy cut-outs as decorations.

Yet, it was the question I found myself asking in my mind last night as I got ready for bed and contemplated the journey back to Boston and working/studying/data analysis/teaching/writing/whatever-it-is-I-actually-do after a swift and very full holiday vacation.  I have a tentative nature when it comes to work and school, and I put a lot of effort, particularly mental effort, into trying to make sure I do everything right and just as others want.  The idea of failing is so scary I almost never allow myself to fully contemplate it.

Not so with cooking.  There, I am not so afraid of mistakes.  Sometimes I might even be daring.  I certainly try things I’ve never tried before all the time, even when I’m cooking for strangers or people I want to impress.  Perhaps it’s because of the extremely concrete nature of what failure would mean in this context. Barring hacking a limb off with a knife or burning the entire house down, failure simply means you make something that tastes horrible, neither you nor your guests will want to eat it, and you will simply have to do one of the following: a) throw together something super simple and quick in it’s place (like spaghetti or grilled cheese); b) order take out; or c) skip straight to dessert.  And in the end you’ll probably laugh.

When it comes to work or school, failure feels far less concrete, far more scary.  Not doing as well as I’m expected to on something may, in fact, signal doomsday.  Complete and utter catastrophic chaos.  Billious black clouds and gnashing of teeth and such.  That’s what I would have myself think, at least.  Which makes work an even more strenuous proposition than it otherwise would be.

But, the fact of the matter (I think. I hope.) is that in this context, it is just as in cooking.  Failure is failure, nothing more.  It is not the end of the world.  Failure may mean having to apologize, or maybe having some responsibilities revoked or having someone laugh at you, or maybe even getting kicked out and having to find something else.  Which would be hard, possibly painful.  But still, it turns out this probably wouldn’t be the end of the world.

I’m terrible at resolutions.  I tend to forget them within a few days.  But, I make them nonetheless, if only to make a brief mental commitment to a particular direction or disposition.  This year, I am resolving to try to throw myself into everything with the attitude I have in cooking, a little bravery and abandon.  I doubt it will work all the time, but even the occasional reminder and attempt is a good thing.  We all get places one step at a time. 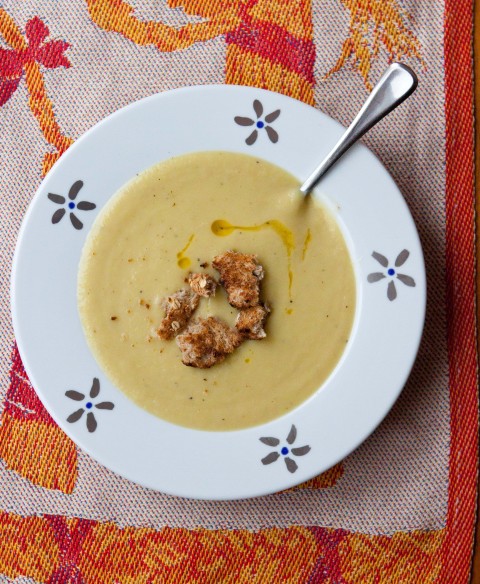 And, with this attitude, I’m also sharing with you a parsnip and leek soup that I made for a dinner party at my parents’ house.  The guests were a set of very discerning (also extremely loving and easy to please, but we’re going to leave that out for the sake of drama here) family friends who hear stories about my cooking and have, shall we say, expectations.  One guest, even, was an extremely talented professional chef.  Obviously the stakes were high (we’re going for drama, remember).

So, me being me, I made a bunch of things I had never made before.  That’s just how I roll.  They weren’t exactly my own recipes – I had way too tantalizing a stack of new cookbooks from the season’s gift giving not to go trolling through them for ideas – they were mostly adapted from Melissa Clark’s new book Cook this Now (which, in spite of its bossy title, is filled with extremely easy going and friendly recipes and headnotes).  We had braised short ribs, a couscous pilaf (ok, I admit, I totally winged that one), and a cranberry cornmeal upside down cake.  But, this parsnip and leek soup, which I made for a starter, may have been my favorite part of the meal.

It’s a twist on the classic comfort-soup potato and leek combo.  The leeks still bring their mellow, green-tinged oniony flavor to the mix, but where potatoes are so mild and creamy as to be almost bland in soup, in this soup the parsnip flavor jovially flings open the shutters and cries, “here I am!” It is redolent with complex sweetness, woodiness, and a trace of spiciness.

There is a bit of potato for bulk, and the addition of celery stalks and leaves (in a much greater quantity than your standard mirepoix) offsets the sweetness with a pleasant, thin bitterness.  With a powerful blender, you can whirr this into an impressively creamy soup.  If you are like my mother, who likes cream in quantities even larger than I care for (we are dairy fanatics, my family), you may want to stir in a bit of creme fraiche at the end.  But, I don’t think it needs it.  What is nice is a last-minute squeeze of lemon, to add perkiness to the thick, warm hug of the soup.  Finally, some homemade croutons of a hearty, seeded bread give nice bites of crunch.

Of course, you could also sprinkle on bacon.  Or, I can say from experience that chunks of smoked salmon are good stirred in.  You could spice the soup up a little with some nutmeg, or some curry, or something else entirely.  Experiment.  Here’s to a brave new year!

§ 20 Responses to Parsnip and leek soup

You are currently reading Parsnip and leek soup at Five And Spice.