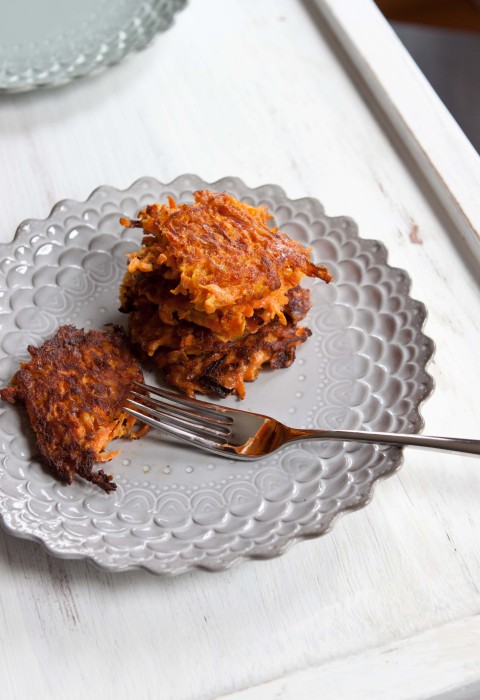 Or maybe these are latkes.  I’m not terribly well versed in the spectrum of grated potato pancakes.  And so I’m going to say these are a take on rösti because that simply seems more fun to me right now.

Either way, I figured that the potato should not have the corner on the market on this style of cooking a root vegetable, and on my continued quest to make carrots in diverse and exciting new ways I shredded them and fried them into little rounds.

(And I didn’t want to call them fritters because then you’ll all think that I’m obsessed with fritters (given that I’ve made several different kinds already.  At least, in my mind I have.  I’m not sure about it in reality, come to think of it), and we all know I have more than enough obsessions to go around already.)

I only know what rösti are from some photos my father took on some backcountry skiing trips he did in the Swiss Alps, where they are a staple food up in those picturesque huts where you can also come by beer or coffee.  They looked pretty much exactly like what they are, cakes made of shredded and fried potato, sometimes with cheese, sometimes with eggs and bacon.  And, the gleeful look on my dad’s face when he talked about them was a message as loud as if it had been yelled through a bull horn about how delicious they were.

Last week, right before Thanksgiving, I was working at home (that is to say, I was monitoring the pup full time, while madly trying to make at least a detectable amount of progress on my data analysis). Around about noontime, I went scrounging for lunch, and determined we had almost nothing to eat in the house except for things that were going to be used in the T-day feast. 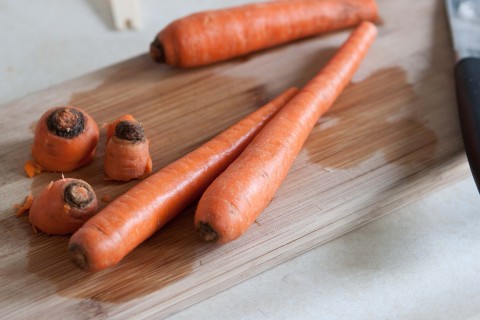 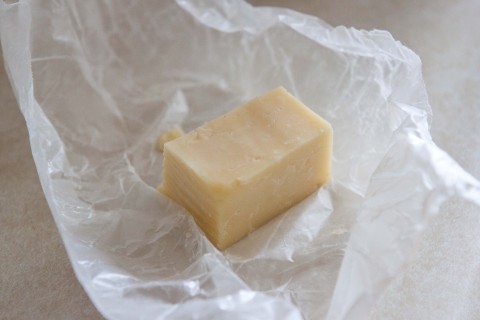 Through some refrigerator spelunking, I came upon some leftover carrots (like any root vegetable worth its salt, carrots keep forever and a day if stored in a cool, dry place, preferably with a bit of dirt still on them). Carrots, and I also unearthed a small hunk of cheddar.  Okay.  That was something.

I decided that I would make my version of rösti out of them.

Lest you think that the combination of cheddar and carrots is so bizarre as to have been borne only out of the direst of straights – that being our fridge that day, even while a turkey was staring straight at me – I had actually had it before in casserole form, following a recipe from The Great Casserole Cookbook, by the wonderful Bea Ojakangas. 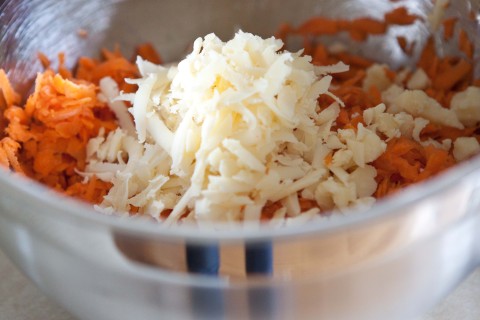 The casserole tasted very much like, well, a combination of carrots and cheddar.  But this turns out to be a surprisingly tasty combination.  The earthiness of the carrots and that salty, sharp pungency of cheddar somehow jive together.  So, shredding that nubbin of cheese into my carrot rösti seemed like only a minor leap of faith.  Nothing too dramatic.

Now, here’s where I think I veered into latke territory, if you’re looking to be technical, split hairs, nitpik, and the like.  Into the grated carrot and cheese, I folded eggs and just a smidgen of flour to make sure the fragile rösti would hold together.  My faith is great enough to encompass the combination of carrot and cheese, but not the idea that if you simply fry a shredded root in a slightly flattened pile, it will somehow miraculously hold together. 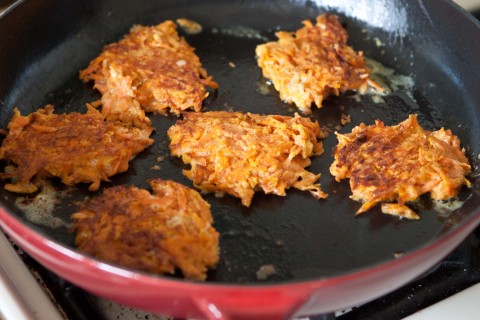 These I flipped a little too soon!  (Especially the middle one.)

In a well oiled pan, you drop this batter by the spoonful and gently press it to form patties.  Or you could simply fill the pan and make one large rösti.  But that takes more flipping skill than I can muster when making lunch.

Fry them gently, until crispy brown on the outside, with crackling, lacy edges.  The browning is aided by the delicious way fried cheese forms a delicate crust. The carrot inside winds up being cooked until crisp-tender.  I found I liked the carrot cooked enough to be sweet but to still have some of the essence of its crunch, putting up just a bit of resistance against your teeth. (If you fancy completely cooked carrot, you can finish the cakes with a turn in a 350F oven for 10 or so minutes.)

I have this funny idea that these could be quite tasty with applesauce (oops, straying onto the latke field again).  They’d definitely be good with a fried egg (what isn’t, pray tell?).  But, I ate them just as is.  Warm out of the pan, and stacked into a satisfying little tower on my plate.  Not bad for a scrounged lunch. 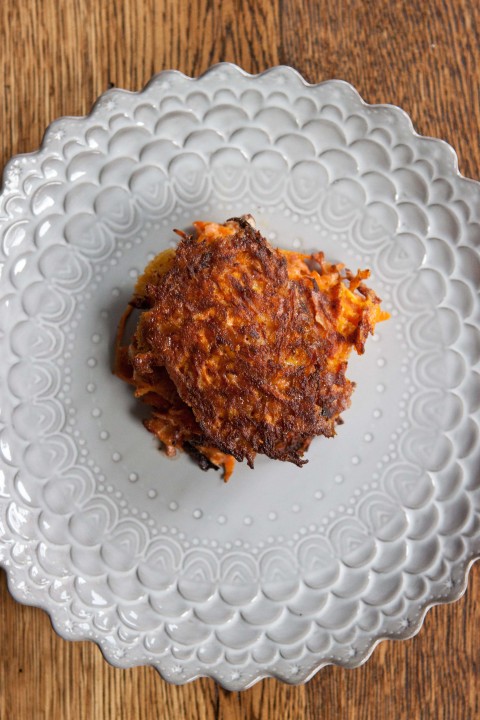 Mini Carrot and Cheddar Rösti (makes a bunch, lunch for a couple people, snack for more)

You are currently reading Carrot rösti at Five And Spice.