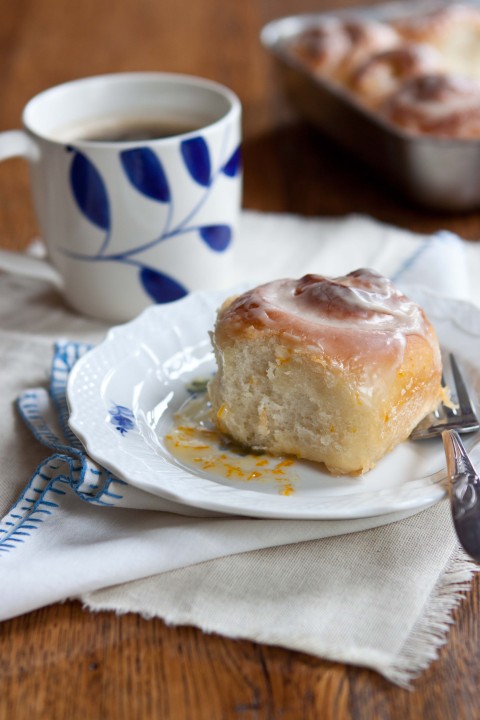 Thanksgiving is over.  Sigh…

Now let’s turn up the “Jingle Bells” and start preparing for Christmas!!!

Okay, just kidding.  I’m not ready to start decking halls and listening to Christmas carols quite yet, no matter what the advertising industry wants me to do.  Though the twinkle lights that have been appearing on the trees in the squares, making them look as though a little fairy has flown through and sprinkled holiday cheer dust everywhere, are bringing me a great deal of joy (thank you fairy and/or city decorators!).

But ready or not, it turns out, Christmas has, in a way, come a little early for us this year when this adorable little ball of fur rolled into our lives.  We’ve been wanting a dog – an Australian cattle dog mix, specifically – for a while, but the decision to get little Squid (yeah, that’s her name) was made suddenly.

A friend forwarded us an email from the shelter where she had gotten her dog, ‘homes urgently needed for four little Australian cattle dog mix puppies.’  We fell in love with Squid’s little face in the picture on the email, and within a couple of hours it was decided.  We would become her new family.

And so, for the past week the sum total of my thought waves has been, “Puppy.  Puppy puppy.  puppy.  Must remove that from puppy’s mouth.  Must take puppy out again.  Must teach puppy that it’s ok to be in her crate for an hour.  Good puppy.”

All of my maternal instincts, cares, and anxieties are currently being channeled into this teeny four legged critter whose favorite pastime seems to be to snuggle into a ball on my lap and look flat out, idiotically adorable.  Both Joel and I are totally melted into piles of cooing mush.  I’m befuddled by how I can possibly adore a puppy, a member of a different species whom I have known for less than a week, so much.

But there you have it.  I mean, I find myself already worrying about her future and how to make sure she grows up a well-balanced and fulfilled dog.  I’ve got it bad.

Squid is remarkably perspicacious.  Which is great, in that she is already (at 9 weeks!) learning to sit and stay on command, how to signal she wants to go out, and some of the things she can and can’t chew (admittedly there is a pretty limited number of things for which she has that distinction down).  However, it’s also problematic in that, she’s totally learning how to manipulate us into giving her treats and she gets bored of her toys easily and wants new, more exciting things to do.  Now.

Suddenly I can only get things done while she’s sleeping because otherwise I have to be continually watching what she’s trying to chew on in order to swoop in and replace it with an appropriate toy.  Redirection is a consuming pastime.   My work is getting done in 15-30 minute spurts.

That’s how these sticky buns got made.  In snippets of time during Squid naps – limited to naps of the variety during which she was not attempting to become one with my lap.

These rolls are a little whiff of Christmas come early as well.  Appropriately decadent for sharing on a lazy holiday morning, the wafting scent of the orange zest conjures up everything Yuletide-esque, and the sticky drippy filling languidly coats your fingers and mouth in that way that is a special occasion treat, rather than a mess.

If the composition of Christmas Day breakfast weren’t already predetermined and well nigh sacred in both of our families, I would make these as an offering for that table.  As it is, I got the idea, I had an itch, and over the course of several puppy naps (yeast doughs are actually quite amenable to the restrictions of napping) I scraped them together for Thanksgiving breakfast.  (Why not start off a feast day with something that is a harbinger of the deliciousness to come?!)

I haven’t traditionally cared much for sticky buns.  They’re usually a bit too sweet, the bun-ness of them completely smothered by the thick avalanche of caramel that coats them.  I decided I wanted a sticky bun where the bread was a key player in the flavor mixture, and where the sticky sweetness would be tempered by a bit of tang and some spicy or fruity perfume.

I started by wondering if Joanne Chang’s (of Flour bakery) focaccia dough would work for sweet rolls. It is, quite possibly, my very favorite bread dough, amazingly rich, tender, and pillowy, but enriched only by olive oil (quite a bit of it!). This gives it a lovely, lively floral flavor. Mulling over this made me think, in turn, of olive oil cakes and how enticing they are, particularly olive oil cakes with a bit of orange flavor and zest worked into the mix, bringing just a hint of bitterness along with fragrance. 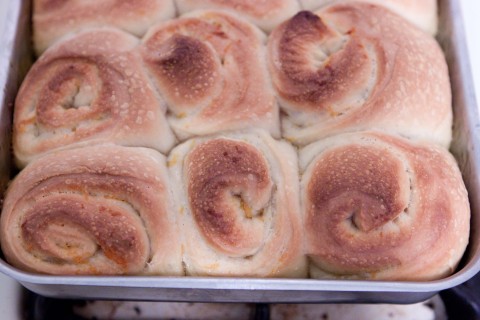 The decision from there to make to make a sticky filling with orange zest and juice (plus a little squeeze of lemon juice to add some refreshing extra acidity), was an easy one.  And stunningly delicious.

After this, while looking at a Melissa Clark recipe for olive oil and orange cake, I noticed there was buttermilk in the batter. This gave me exactly the little directional nudge I needed to go ahead and gild these lillies.  Playing off of that idea, I decided to make a buttermilk glaze, simple and sweet but with the light tang of buttermilk.

The end recipe has a number of components and steps, but no one of them is too complicated to be accomplished during the span of  a critter nap, and is likely even easier when you can keep both eyes on the mixing bowl.  And, like most rolls, you can make them the day before and then refrigerate them overnight to be assigned to the oven the next morning, ready to come out warm and gooey just as the breakfast crowd is stumbling in, and without you needing to get up hours early.

Though you may decide that you want a nap later too anyway.

You are currently reading Orange scented sticky buns with olive oil dough at Five And Spice.