Crostini with squash and kale

Curse the design and marketing team at Crate & Barrel!  Curse them for being good at their jobs!  Here we are, still knee deep in October (arguably the best month of the year), and an idle flip through their latest catalogue has left me jonesing for Christmas (not only Christmas, but all sorts of related decorative elements that I truly do not need).

Christmas is, it must be said, my very favorite holiday and my favorite season (I have a major failing for twinkle lights and Christmas carols.  What can I say?  Character flaw, perhaps.), so it doesn’t take a ton to get me excited about it and chomping at the bit for it to come.  But, to do so to the detriment of appreciating fall, glorious fall, well that would be tragic.

So, I am pulling myself back and rooting myself in now, which happens to be a rather lovely now, with an electric blue sky, fading crimson leaves, and an impish breeze.  And I am thinking about squash.  Because that is what one thinks of when one thinks about fall, no?

The advent of fall always gets me extremely jazzed up about squash, and makes me want to horde them, forgetting how much I will have eaten by the time we survive March and April.  Those slushy, barren days of squash and cabbage blasé still seem like a far away impossibility.  (You know, because I am in the now, and all!) 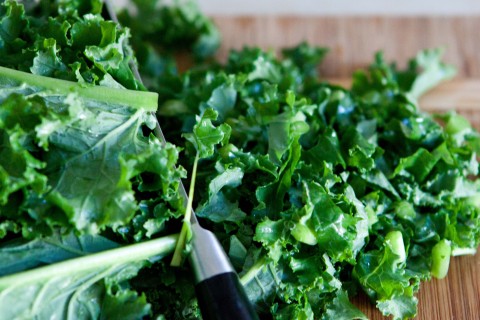 If I were a chipmunk, I’d probably have lumpy, full cheeks stuffed with butternut and kabocha squash.  I would look weird.

Suffice it to say, what better way to really celebrate October than to cook something with squash, perhaps combined with some frost-hearty greens like kale?

Now, maybe I’m actually incredibly predictable and uncreative, perhaps I just really like things on toast, but at any rate I decided to make crostini, something I do rather often.  I just love to slather and pile things on crusty pieces of bread, be those things goat cheese, figs, meyer lemons, and olives or honeyed grapes and ricotta, or even a little decadent pork pate (oh shoot, now I’m hankering after pate).  It’s such a simple and delicious way to turn an assortment of produce into a little appetizer, or even a light meal.

The combination of winter squash and garlicky kale has a wonderful interplay of sweet-savory flavors along with both delightfully smooshy and sturdy, leafy textures.  Piled generously atop a smear of creamy ricotta laced with some lemon zest for fragrance, it was a truly delightful way to top off some toasty slices of bread.

Then we added some bowls of soup and it was most definitely perfectly October.  Which is not to say I won’t probably make the exact same thing several times again come December, and perhaps then with a little glass of champagne…

§ 7 Responses to Crostini with squash and kale

You are currently reading Crostini with squash and kale at Five And Spice.