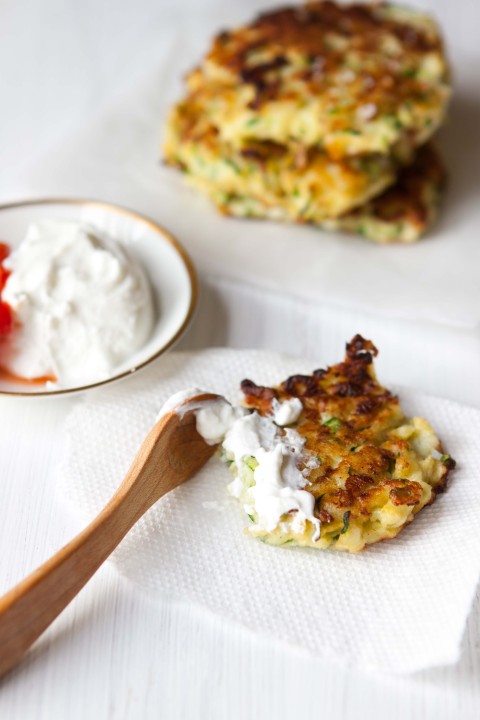 I feel like I’ve been wanting to make zucchini pancakes (or fritters, I’ve seen them called both.  They’re the savory small kind of pancakes, not zucchini bread-esque sweet ones) since approximately the dawn of time.  Though, when I think about it a little bit more carefully, it’s more like since about mid-July.

Remember Sofra Bakery and Cafe, which I mentioned a while back? (More accurately, which I gushed over, swooned over, and nearly asked to marry me, even though Joel, I think, would have been slightly peeved if I had run off with a bakery-cafe.  I, on the other hand, would have been very well fed.  But perhaps starved for conversation.  Anywho…)  When we were there, I watched (I have a terrible staring habit sometimes) as a young woman, wearing aviator sunglasses if I remember correctly, sprang up to fetch her order when her name was called, and walked back to her seat carrying a dainty copper tray laden with a stack of slim golden cakes, flecked with green.  What were they?  Whatever it was, I had missed it.  My eyes darted up to the menu and scanned over it again.  They had to be the zucchini pancakes.  I was instantly consumed by food envy.

Then I turned back to my flatbread, stuffed with cumin-spiced sausage, oranges, green olives, and yogurt sauce, and I was pretty much entirely happy again.  But, zucchini pancakes stayed on my mind. 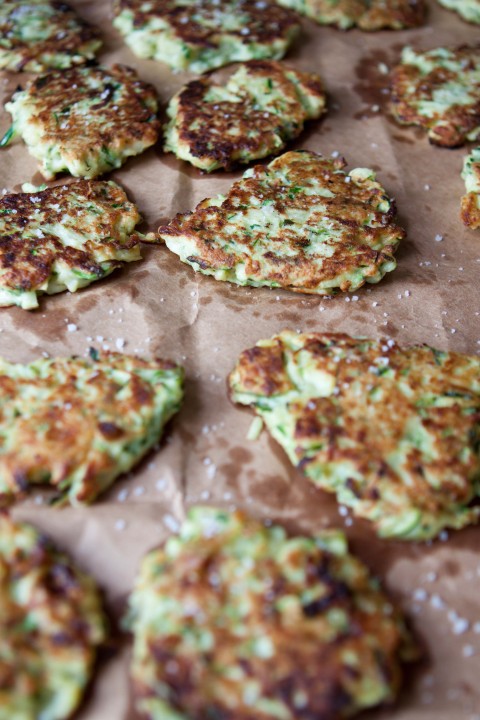 I think they’re one of those things that are considered the thing to do when your garden, and refrigerator, and counter tops are overrun by zucchini at the peak of the season.  The ones at Sofra were described as Turkish-style zucchini pancakes.  Do they even have a problem in Turkey with too much zucchini come August? (I expect an answer to that from someone.)  It turns out, though, you most certainly should not wait until you’re at your zucchini-wit’s end before you make these.  They’re worth making at your zucchini-wit’s beginning, even! 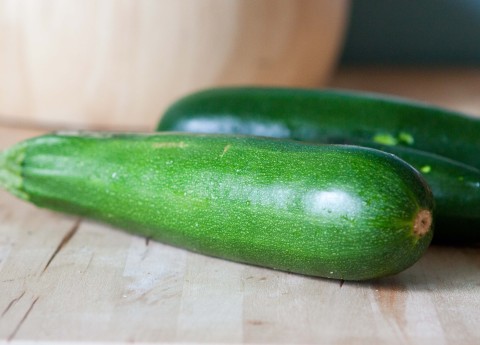 As luck would have it, we wound up not having a particular overabundance of zukes this summer.  I had made plans, people, and they were thwarted!  I barely got to do half the things I had schemed up for zucchini.  Maybe not even a third!  And, then I started waking up to 45 degrees in the morning, and it started to look suspiciously as though summer was going to end without a single zucchini pancake gracing our table.

But then yesterday, I saw them in two separate places.  First, there’s a picture of them on the front of the gorgeous new Food52 cookbook (due out October 25th and now available for pre-order, actually) – which I have a recipe in, by the by!  Toot, toot!  It’s so exciting!!!  That whet my appetite.  Then, I was flipping through an issue of Food & Wine magazine from earlier this summer and a recipe for zucchini-ricotta fritters from Mario Batali caught my eye.  Zucchini and ricotta?!  Seriously??!!  That was the last straw, the kick in the pants I needed.  I decided that my day had had quite enough editing, statistics, grading, and planning for one day.  It was time for a trip to the market where I picked up two of the sturdy green squash.  Then, home to grate, stir, scoop, and fry. 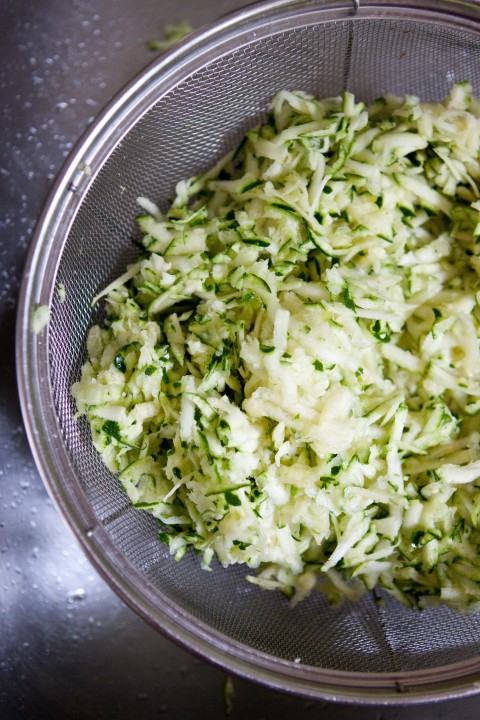 You should be impressed I got any photos because these crispy, sizzling little guys practically grow legs as they come off the griddle and go leaping right into your mouth.  They form a delicate crust around the outside, which encases a center that is wonderfully tender and slightly sweet from the ricotta.  This is shot through with slinky threads of zucchini, neither mushy and limp like thoroughly cooked zucchini nor spongey like raw zucchini, but right in between.  Sturdy enough to assert its presence, but just barely.  And, the lemon zest, garlic, and scallions give them a remarkable degree of fragrance, far more complex than I had expected and thoroughly enticing. 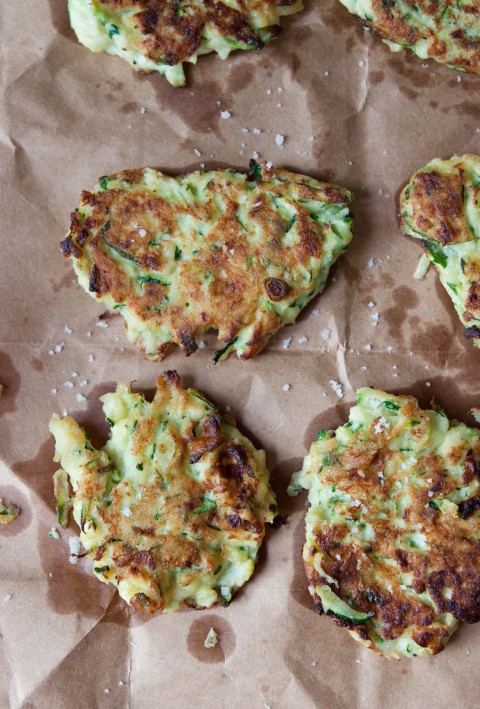 I followed Batali’s recipe pretty closely, but I did make one – fairly important – change.  He has you mix the shredded zucchini right into the rest of the ingredients immediately.  But, I highly recommend you let it drain and then give it a squeeze first. Zucchini, once cut, beads up with moisture like an icy glass on a hot, humid day.  All of that moisture will sog up your fritters too much, especially since they already get a good deal of moisture from the ricotta.

These make a fabulous (potentially appetite ruining) pre-dinner snack, appetizer, or light dinner, or even breakfast.  Sprinkle them with a pinch of sea salt and serve them all on their own, or, to really make it a meal, serve them accompanied by labne or Greek yogurt, perhaps with a spoonful of feta stirred in, and a bit of tomato confit on the side.  Is zucchini season really drawing to a close?  I just got started!

You are currently reading Zucchini Ricotta Fritters at Five And Spice.