Hoo-wee, we are having some weather out there.  The wind and rain are battering my windows like ill-intentioned thugs trying to get in.  The potted plants and deck furniture have the look of a bunch of cast-aways where they’re clustered, near the entryway, but I think they’re giving me looks of thankfulness – ‘thank you for not leaving us out there!’  And, for perhaps the first time ever, I’m feeling rather glad we don’t have any large trees growing right next to our apartment building.

I’m so thankful that the hurricane had calmed somewhat, into a tropical storm, by the time it came to visit us this far north.  We still have power and water (knock on wood), so I cannot complain one bit.  It’s still nothing to mess with though.  Hunkering is the only word to describe what the city is doing. 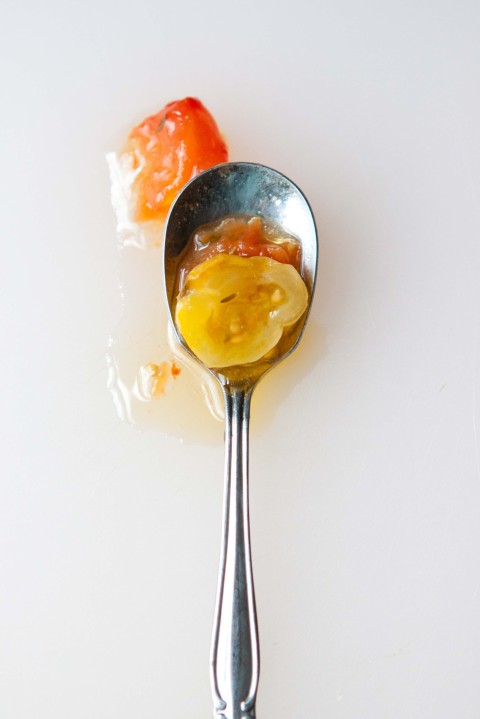 Joel is off working in Ethiopia for the week, so I’m holding down the fort by myself, which, I must say, is not generally the way I would choose to face a howling storm if I had my druthers.  It’s a bit lonely.  I’m enjoying the friendly clanking and puttering sounds of the neighbors downstairs as they amuse themselves indoors.  They’re providing a comforting contrast to the menacing noises coming from outside.

And, Joel being away has actually left me with a built-in mechanism for amusing my own self.  You see, not only is he away, resulting in one less vegetable-eater in the household, but a friend of ours is also traveling, so I picked up her CSA fruit and vegetable share for the week in addition to ours.  The result – which I was somewhat taken aback by, though I should have seen it coming – is that I have a whole lot of food to contend with.  An army of tomatoes, a battalion of peaches, squadrons of zucchini and eggplants and kale all lined up on the kitchen counter, issuing a challenge.  “Fine!”  I respond with my own challenge, “Let’s see what you’ve got!” 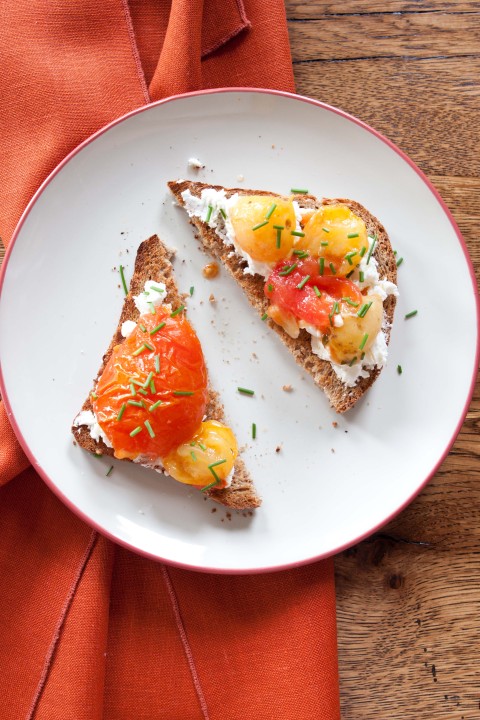 I made a list of the meals I’m going to eat this week in order to put all the vegetable matter to good use, which made me feel like one of those fabricated people who live in the Pottery Barn catalogue and list their suppers for the week in quirky handwriting on a chalkboard in the kitchen.  Except mine is in a nearly illegible scrawl on a piece of scrap paper.  I wonder if maybe a chalkboard would make me more organized…and give me better handwriting…I already know the answer to that…and it is not in the affirmative.

I’m also putting food by like crazy today.  It’s such a cozy, holing-up sort of thing to do in the dark, foul weather.  A pot of chicken stock is burbling and simmering contentedly on the stovetop, making the place smell like Thanksgiving.  When it’s finished, I’ll use it to make a vegetable soup to freeze in batches.  I’ve made pickles and canned peaches and herb jam.  Later, I may bake up a peach crumble to bring to friends when the sun reappears tomorrow (is that really going to happen?  That’s the word on the street, though I’ve learned through the years, “never trust a meteorologist when it comes to the weather.” 😉 ), or maybe some bread.  It’s that kind of day.

I’ve also taken a carton of tomatoes and slowly, languorously turned them into confit.  Confit is one of those things that sounds like it’s probably about as easy to make as 12-tiered cake in the exact to-scale shape of a cathedral by Gaudi.  But, it’s really not all that complicated, believe me.  All it takes is the willingness to cook something at a snail’s pace in fat – if it’s meat, then probably its own fat, and if it is vegetable, then usually olive oil.

If you wish to make confit tomatoes, there’s nothing to do but put some sliced tomatoes in a pan with a golden pool of olive oil, some garlic slivers, and herb sprigs, then set it in a barely-hot oven.  If you do this while your coffee brews for breakfast, you’ll have tomato confit by lunch!  And in the meantime, you can mop your floors, paint a small mural on one of your walls, learn to do the hustle, watch old episodes of 30 Rock, read a book of limericks, or any number of useful things.

After 2 1/2 hours, what emerges from the oven are slumping, sweet, velvety tomatoes, softly suspended in a brothy sea of olive oil and tomato juice.  Their flavors will have concentrated to become intensely rich, candy-like tomato-essence, which pops and melts in your mouth, dissolving into the oozing sensation of eating the saturated August sun.  Once cooled, you can freeze the tomatoes for later, spread them onto pizza crust, toss them with pasta, nestle them in sandwiches, or blend them into soup.

But, here’s something you should do with them right away.  Toast or grill a sturdy piece of whole grain bread until it is crisped on the outside.  Smear this with a generous coat of creamy young goat cheese.  Then, gently spoon several of the juicy, colorful tomato orbs on top, and snip chives over them.  Eat this for lunch as you contemplate the weather, and  a potential art project for the afternoon.  And trust that the sun that grew those tomatoes will show up again soon.

§ 12 Responses to Tartine with goat cheese and confit tomatoes

You are currently reading Tartine with goat cheese and confit tomatoes at Five And Spice.