Oh yes. Raspberry ice cream sandwiches.  You know I couldn’t keep them from you.

I have a friend who, as a joke, if you say something he disagrees with or that turns out to be wrong (you know, something like a weather prediction or saying you’ll arrive 5 minutes earlier than you actually do), will shake his head sadly at you with a mixture of disappointment and frustration and a joking glint in his eye, and tell you, “you know, I just really wish you weren’t a liar.”

It sounds like kind of a mean thing to do when  I try to describe it, but it’s actually quite funny.  And I can imagine him doing it to me right now.  A deep sigh of feigned disillusionment and dismay, and an “oh Emily, you don’t have to lie to me, you know.  I just wish you weren’t a liar.”

Ice cream sandwiches, to be exact.

I suppose it couldn’t really be helped.  After years and years of summers filled with walking from the beach to the kiosk to buy ice cream as an afternoon treat, a big pack of cousins and siblings wandering down the street with a few kroner each, ice cream is synonymous with summer vacation.

(Just as a little aside in my, my parents’, my great-aunt’s, whomever’s nutritional defense, the portions of these ice creams were, and still are, quite small.)

Now, I’ve had the lucky opportunity to become rather choosy about my ice cream over the last few years.  By virtue of living near an ice cream parlor that makes the best ice cream in the country (literally.  I believe it was declared as such by  several food magazines at various points) I’ve gotten so that I can’t really handle low quality ice cream, full of stabilizing chemicals and carageenan and whatnot, any more.  (I’m sorry if this makes me snooty!  But, there you go, it’s the truth.)

Not so with ice cream sandwiches.  I have no claim to snootery there.  I totally love those paper-wrapped ice cream sandwiches that come in a box.  The ones with the soft, soggy chocolate cookie that sticks to your fingertips in a thin film and the super-saccharine vanilla ice cream that oozes out so you can lick it around the edges as you eat.  They may not be good, but, well, they’re good.

These ice cream sandwiches, however, are a far cry from those.  They’re good and good.  They are truly delicious, a blend of high quality ice cream with all the lighthearted fun of eating it in sandwich form.  And, they’re what randomly popped into my mind when contemplating what to do with a haul of raspberries.

Thank goodness.  I would eat each portion – the ice cream and the shortbread – happily on its own, but together, oh my, they really add up to something.

I made a creamy vanilla ice cream base to which I added a serious amount of raspberry puree.  The ice cream tastes lushly of berries, their juiciness and acidity cut right through the cream, making it almost as light and peppy as a sorbet.  If you’d like the ice cream to have a stronger sense of the soothing voluptuousness of cream enrobing the bright berries, cut back the raspberry puree by one cup.

The shortbread, adapted from an old Bon Appetit, is a fairly basic shortbread recipe with toasted coconut flakes added.  But basic shortbread never tastes basic.  It tastes wonderfully salty and buttery .  And these cookies have fragrant golden toastiness from the coconut.  I also laced the dough with cheery lemon zest and juice because lemon and raspberry are such a stellar combination.

These ice cream sandwiches are best done as a two day project, given you have to make the custard base, let it cool, churn it, let it freeze, bake the cookies, assemble the sandwiches, and let them freeze.  But believe me when I say it is worth it.  Your work and patience will be rewarded, and the sandwiches will taste all the better (as if you needed them to taste better) knowing you labored for them. 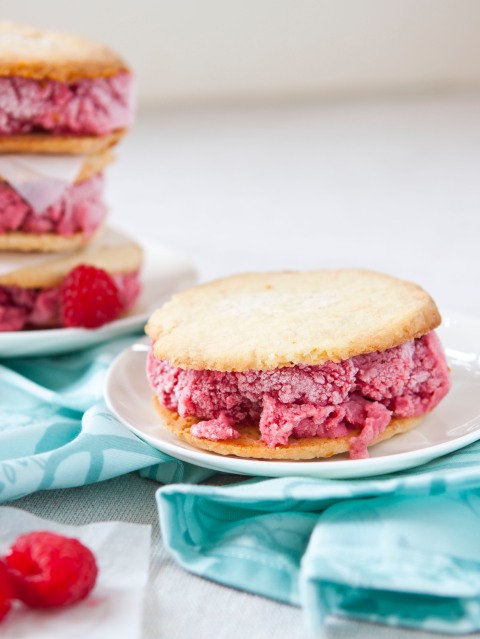 The thin cookies are crisp and chewy and give way satisfyingly under your teeth as you bite in.  Then you find the soft, velvety trove of ice cream within.  The flavors melt together into an effusion of sunlight, and islands, and berry bushes, and drippy pink rivulets of cream running down your chin or fingers.

I’ve said it about other things, but I’ll say it about these too.  This is summer.

You are currently reading Raspberry ice cream sandwiches with lemon coconut shortbread at Five And Spice.