Is it just me, or does the advent of summer put you the mood for happy hour too? Potentially even a daily happy hour. There’s nothing wrong with that, right? 😉

I suppose that, technically, happy hours are called happy because of the inclusion of alcohol, but I think they’re happy in so many other ways. It’s a celebration of porches or patios! And evening breezes! And of the fact that you can laze about for an hour (or two) after work, enjoying some ridiculously buttery cheeses and crisp breads and a little glass of wine, and it will still be light out when you get around to dinner!

Joel and his parents joined us in Minnesota late in the week last week. And, on Friday we decided to have a little happy hour for them to introduce them to all the neighbors and welcome them to the north country. (It was the least we could do, given the weather certainly wasn’t being cooperative or welcoming. Their airplanes had to be diverted to the Twin Cities because Duluth was too foggy for landing. And then they wound up getting bussed up north at 3 am. Uffdah!)

As we were vaguely planning the happy hour (a good happy hour really shouldn’t take more than the vaguest of planning, otherwise you’re working too hard and it just isn’t as happy) my mother turned to me and said, “Oh, I have some beets that need to get cooked. Will you make something with them?”

“Sure, I’ll make a flatbread or something.”

It was an innocent enough promise, but then I discovered that my mother included the fact that I was going to make a fancy flatbread in her message to the neighbors telling them to come over. We got home from some errands just a half hour before people were set to arrive and my mother casually mentioned, “everybody’s going to come because I said you were going to make something and they’re all excited to eat it.”

Huh? I thought they were coming over because they were excited to see me, and Joel, and meet his parents! (Which in fact was the case, but you know, good food never hurts.) I needed to action this flatbread!

I decided it would be a better idea to make a tart because a) the crust is quicker to make than a flatbread and b) the crust is full of butter and is flaky and delicious and it practically doesn’t matter what you put on top of it because the flaky butteriness will make it taste phenomenal. 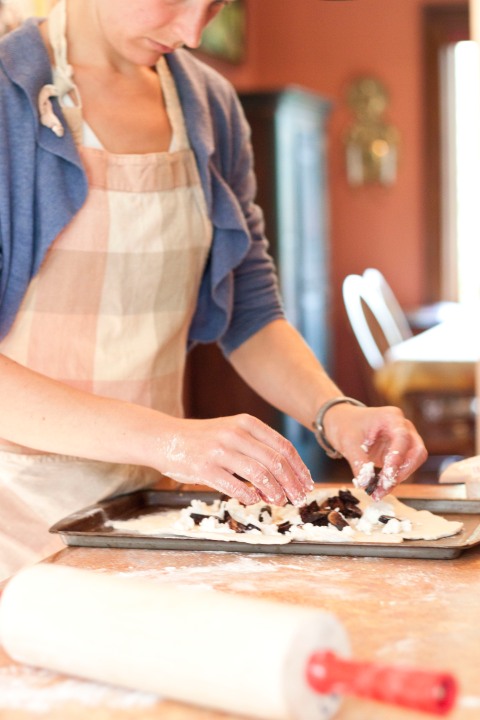 Okay, that’s maybe a slight exaggeration. You do need to think a bit about the combination of things that you will put on a tart to be sure they go together. I knew I was using beets – which I thrust into the oven to roast while the dough for the crust chilled – so I decided to play it safe and pair it with goat cheese. Earthy sweet beets with creamy, tangy chevre is always wonderful.

Looking through the cupboards, I found some dried figs. Figs also go well with chevre, I thought, why not add some in? I also grabbed the balsamic vinegar and made a quick little syrup to pour over the finished tart. Then I finished it with a handful of chopped mint, cool and pungent. (And Joel decided to document the whole process on my camera, which was fun!)

I paraded the tart out to the group of friends who had assembled around the picnic table and were chattering and laughing as animatedly as a flock of birds. We refilled the wine glasses, passed the tart around the table, and I instantly got several requests for the recipe.

I suppose because beets can be messy and stain one shouldn’t really serve them to guests. But, then, the same could be said of red wine. And truly, stains wouldn’t have mattered the least in that crowd of old friends – plus a couple new. It was one of the happiest hours I’ve spent in a while.

Tart with beets, figs, and chevre

§ 26 Responses to A happy hour beet and fig tart

You are currently reading A happy hour beet and fig tart at Five And Spice.