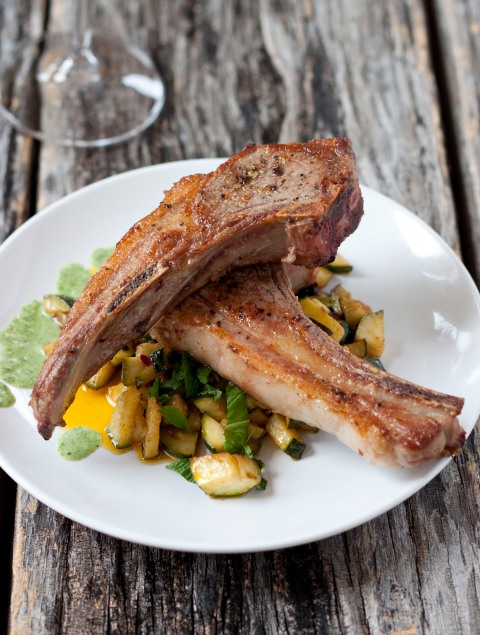 Gratulerer med dagen!  It’s Norway’s national day, so I’m all in a tizzy getting ready to celebrate, and I’ll get back to you with some delicious treat from the day, but for now I’m going to share this post, which I wrote yesterday but didn’t get a chance to publish…

As I’m sitting writing, I’m looking through the windows watching a couple of little neighbor girls outside playing in the rain.  They are a whirl of colorful rain coats and spindly legs, executing awkwardly graceful dance moves as they boogey around and over the picnic table, over and over again.  It’s sweet to see.  It’s giving me a better attitude about the rain, actually.  And, it also has me thinking about books.

I feel like I’m not a very good reader these days.  What can I say?  Something about the process of spending long days reading papers full of painfully passive sentences or obtuse allusions to social theory that I do not remotely understand (this, for example: “Structures exist paradigmatically, as an absent set of differences, temporally ‘present’ only in their in their instantiation, in the constituting moments of social systems…”  Do you understand that?  Because I don’t.) leaves me feeling rather loathe to crack open a novel at the end of the day, at least one that’s at all high quality since it’s almost bound to be depressing and require more thought than I’m willing to expend.

I have, though, been reading children’s literature.  These books are the opposite of convoluted, but still tell wonderfully engaging tales.  I just made my way through my favorite trilogy of dragon stories, and I suddenly remembered a book that I loved when I was younger that I might have to seek out to read again, Tales of a Fourth Grade Nothing.  Did you read that book?  It’s the story of Peter, a well meaning and generally well behaved fourth grader who has a younger brother called “Fudge.”  And, Fudge is a little hellion but somehow he almost always manages to be the one who gets the attention and gets his way because he’s so cute.

There’s one point in the book when Fudge goes on what is known in the business as a “food jag,” when he refuses to eat anything except for certain favored foods.  Actually, he refuses to eat anything.  Eventually his parents try to ply him with lamb chops, his favorite food, and I think the scene devolves into the dad dumping a bowl of cereal on Fudge’s head.  Classic humor for a late grade-school reading level.

I think this scene may also have been the first time I started to consider lamb chops as something worth eating.  Before that I was grossed out by lamb.  I’m so glad I did open up to lamb chops because they are one of the ultimate foods.  Flavorful meat, almost as soft as velvet, that you get to gnaw right off the bone.  It doesn’t get much better than that.  Lamb chops only need salt and pepper and a brief stint in the frying pan to be perfect.

But, if you do want to gild the lobster (I’ve decided lilly-gilding is way less hard core than lobster-gilding would be, don’t you think?) try adding this amazing sauce.  It’s an idea that I’ve had tucked in the back of my head from some recipe that I read a number of years ago and finally decided to give a try.  The sauce plays with the idea of the mint jelly that is a traditional American accompaniment to lamb (one that I’ve really never understood the appeal of – I think it’ actually a throw-back to when people ate mutton instead of lamb and needed to cover up the flavor), but then it veers east to take some inspiration from lamb curry, blending in fragrant ginger and silky coconut milk.  The pairing is phenomenal.  The coconut milk softly envelopes the forest-y freshness of the mint while a squirt of lime and spoonful of ginger add zing.  All this from just a quick whir in the blender!

You can serve the sauce at room temperature or warm it up just slightly before you pour it enthusiastically all over your perfectly seared (or grilled) juicy lamb chops.  Then, push aside your fork, which was really just for show anyway, and go to town, gnawing and licking, dripping, and dipping.  This looks and tastes like a meal for fancy company, but you might want to save it for good friends.  This kind of succulence deserves your commitment to sloppy eating.

Oh, and that zucchini that I served piled under the lamb chops – sauteed with a bit of sugar, vinegar, harissa, and it’s own sprinkling of mint – was some of the best zucchini I’ve ever had.  I’ll have to make it again and share it with you, sometime when I’m not feeling slightly abashed by the fact that I made zucchini when it just isn’t quite the season yet (and in a month or two we’ll be drowning in the stuff).

You are currently reading Lamb chops with coconut mint sauce at Five And Spice.