I recently learned the term “your growing edge.” I really like it. I had heard about your comfort zone, and your growth zone, and so forth before, but not the actual growing edge. The growing edge is that area where your zones are pushing out, your comfort zone expanding into what used to be your growth zone and your growth zone dipping a tentative toe into your danger zone. It’s the space right when you go from skiing speedily down a slope concentrating on tough terrain to plunking yourself on the ground and bursting into tears because you find yourself surrounded by trees and signs warning of cliffs and it’s just not fun anymore. Or when you’re learning to drive a stick shift and you know you can get your d@#$ car into gear and started when you’re in a parking lot, but then you’re on a (admittedly not busy) road next to the parking lot, with a bus bearing down on you and your blinker is signaling that you’re going left, except you kill the car 3 times in a row and find yourself feeling thoroughly mired in the middle of the intersection, and, well, bursting into tears. And of course, the growing edge includes bigger moments of growth, pushing yourself in your work, in your ability to face your fears, in your acceptance of others. Like your lengthening legs during your teen years, your growing edge can give you a little pain, whether or not it’s serious.

I’ve been having a lot of encounters with my growing edges recently, which overall, I think, is a good thing. Mostly it has been in my work/school, taking on projects that I’m fascinated but intimidated by. It’s giving me the opportunity to repeat over and over to myself a little mantra. “Advice, edits, and suggestions are not attacks.” Say it again! “Advice, edits, and suggestions…”

Thinking about this got me thinking about my growing edge in cooking. What is it? I actually try to push myself often when I cook. Admittedly, I have a lot of fall-back dishes, which usually go something like: olive oil, salt, pepper, roast. But still, I try to change it up frequently and play with ideas and things I’ve never cooked/done before in order to stave off the food doldrums. But, one area where I rarely go exploring is Eastern Asian cuisine. Somehow it seems so very foreign to my die-hard Scandinavian self, so full of pantry items that I don’t stock up on or don’t even know what are, that I rarely even think in the direction of Asian cooking. Sure I’ll throw together a stir-fry now and then, or roll a sushi roll (with avocado, a thoroughly Western addition) but other than that, I’m a green-horn.

But, on Saturday I began thumbing through The Essential New York Times Cookbook, which I had bought several months ago because it seemed like a fascinating and important tour of cooking in America in the last century and a half and because I think Amanda Hesser and Merrill Stubbs seem like truly awesome people, but which I have utterly failed to use until now because, to be perfectly honest, the thing is a hefty, kind of intimidating, tome and I just haven’t gotten around to it. (I do plan to make my way through it bit by bit though, not so much cooking it as reading it, because it is full of succulent little morsels about history, fads, and Amanda’s clever writing as well as interesting recipes.) The one recipe that really caught my eye, squirming in its seat, waving its hand and urging, “pick me, pick me!” was a broccoli and ginger puree. Heaven knows why. I don’t often fall for purees. They usually seem too insipid, spineless. But, the idea of a velvety, creamy broccoli puree with the subtle spice of ginger intrigued me. It gave me a little nudge and said, “you know, I don’t have to be just a puree. I could be a filling…” The ginger, garlic, and broccoli trifecta make me think of Asian cooking, and so I settled on making Chinese dumplings.

I didn’t know how to make dumplings when I started, or even very much about what technically “ought” to go into dumplings. So, you’ll have to forgive me for the fact that these are far from authentic. But, they are also incredibly delicious. Think of them as fusion food. Because, you see, the thing about the growing edge is, you can cross over more comfortably if you have some sort of scaffolding. A hand to reach out and hold on to as you step awkwardly across. And for me, with the foray into dumplings, that scaffold was dairy. It’s the Scandinavian thing. I’m a major sucker for dairy products. I’m pretty sure I was actually a dairy maid in another life. So, the gentle bath of cream you simmer the broccoli and aromatics in, plus a dollop of ricotta I had on hand to stir in, made the dumplings feel like an evolutionary transition on the way from ravioli to Chinese dumplings. And that, somehow, made them feel easier to cook.

And they turned out so supremely wonderful that I now plan to thoroughly familiarize myself with dumplings through many further experiments. The filling is subtly velvety and voluptuous, but still has that distinctly Asian balance of sweet and spicy and is permeated with the aroma of ginger and garlic. The wonton wrappers crisp up into plump golden packages that give way satisfyingly as you bite into the filling, which bursts with flavor. A sweet ginger-soy dipping sauce completes the picture and makes them into a downright irresistible snack, lunch, or appetizer. Trust me. You’ll nab one to nibble on as you transfer a batch to the serving tray, and then suddenly you’ll discover you’ve nabbed 5. They would also be amazing floating in a brothy mushroom soup. In fact, these little darlings are quickly going from growing edge, to comfort zone, to comfort food in my kitchen. 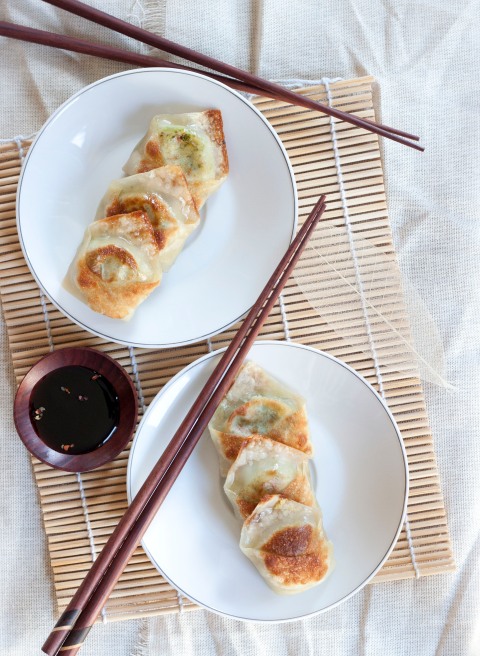 You are currently reading Broccoli Ginger Dumplings at Five And Spice.