Apple cake with caramel glaze for the New Year 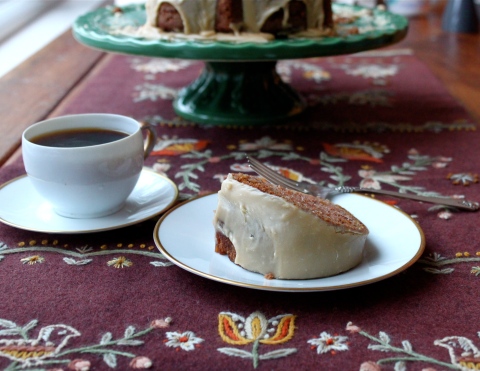 I am one of those people who cleaves strongly not only to tradition, but also to superstition.  This is what happens when you’re raised by a folklorist – you can’t help it.  Sometimes my level of superstition may appear to border on the near-insane.  I have a rock I pretty much refuse to go on an airplane without; my pockets are always jingling with pennies; I pick four-leaf clovers but not five-leafers; I wear silver around the time of the equinoxes and solstices; I spit over my shoulder whenever I see a black cat and knock on wood a lot; I won’t kill a spider.  But then again, how much of human behavior doesn‘t seem pretty crazy?  Superstitions are our little human attempts at making sense of and controlling the uncontrollable world around us, just as much as science and technology are.  As long as you’re not hurting yourself or others, I don’t know that a little dose of superstition should be considered a problem.  Plus, I have an inkling that it sometimes creates a helpful placebo effect – your talisman or other superstitious action relaxes you enough that you can go with the flow of things, and then those things really do go better.

All this is by way of approaching the subject of our New Year’s Eve dinner.  Around the world, all sorts of traditions have come up with foods that they believe are lucky to eat when bringing in the New Year.  We did our best to include as many as we possibly could, while still having a remotely reasonable and coordinated menu.  Lobster is considered unlucky (because it scuttles backward), so that was out of the question (not too hard).  On the other hand, leafy greens, lentils, and other things shaped like coins are considered lucky.  So are pig products, because they’re rich.  We managed to squeak all of those in.  Including leafy greens made into coin shapes!  (Pancakes.  They do wonders.  I’ll share that recipe at some point too, because it was fabulous!)  But, one of the favorite lucky charms for many a New Year’s party is a cake shaped like a ring…Cake?!  No need to ask me twice! 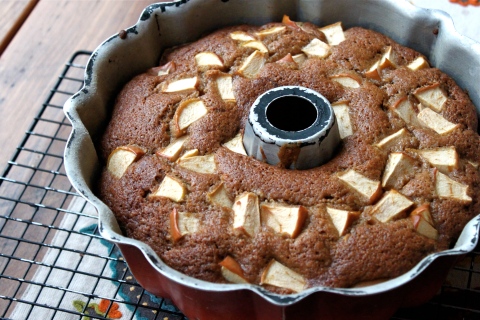 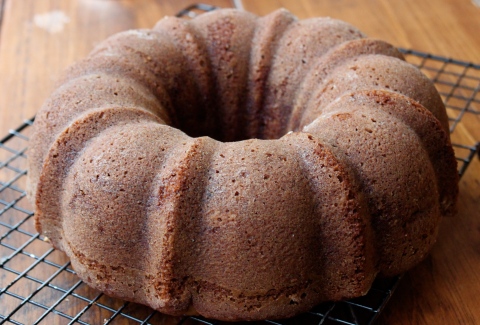 I decided to make a beautiful applesauce bundt cake that I had seen on food52, from one of the editors.  But, if I’m going to have apple-genre cake, then I want apple pieces in it, by golly, because the sweet-tangy bursts of cooked fruit are the best part of an apple cake!  So, I threw in some apples, and changed the spicing up a bit to suit my flavor preferences.  The resulting cake was absolutely wonderful, moist, delicately spicy, chock full of apple chunks, and thickly coated with an unctuous (in the best sense) caramel glaze.  The glaze – which comes from the runaway spoon – is phenomenal, and I’m so glad I chose to make it.  However, if you don’t feel like making a glaze, or if perhaps you want to attempt to pretend that this cake is really an extremely wholesome brunch food (come on!  it has, what, at least 4 food groups in it? 😉 ) I am completely certain that the cake would be just as delicious dusted with powdered sugar and accompanied by a little dollop of whipped cream or ice cream or even some yogurt with a splash of maple syrup stirred in.  And, the cake proved immediately to be quite lucky – even beyond its spectacular flavor and texture.  One of our friends was debating whether to join us for New Year’s or to stay up in the woods with some other friends, but he absolutely loves apple cake, so when he heard that we were going to provide both apple cake and Ranger IPA (from the New Belgium brewing company) he was sold on coming into “town” (for most people out there, it’s still in the woods) to celebrate with us.  Yes, this is a pretty standard reasoning process among my friends.  Good food and drink, better friends, ridiculous games, I think we all determined any sort of trip would have been worth it to be there.

2010 was an amazing, busy, life changing and expanding year, but 2011, consider yourself rung in. 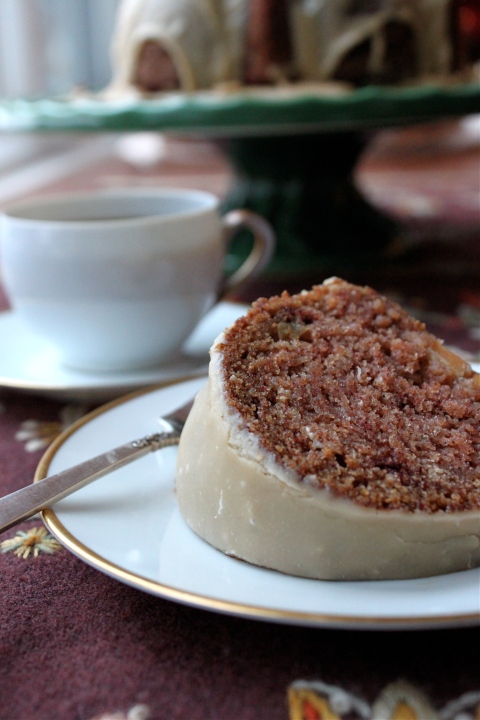 For the caramel glaze:

Preheat your oven to 350F.  Butter a 12 cup bundt pan very thoroughly (I was super nervous that the cake was going to get stuck, but I used plenty of butter and it slid out like a dream) and coat it very lightly with flour (if you don’t have a bundt pan – I had to borrow one – you could use a large cake pan, but it would change the baking time, so you would have to monitor it closely).  In a medium bowl, mix together the flour, baking soda, salt, cinnamon and allspice.  In a standing mixer – or in a bowl and using a handheld electric mixer – beat together the eggs, the brown sugar and the white sugar until light and fluffy (several minutes).  Then, stir in the vanilla, vegetable oil, grated ginger, and applesauce until well combined.  Fold the dry ingredients into the wet ingredients with a spatula until just mixed together.  Then, scrape half the batter into the prepared pan.  Sprinkle half of the apple chunks over the batter.  Pour in the rest of the batter and sprinkle the rest of the apple chunks on top, pressing them lightly into the batter.  Bake for 45 minutes or so (until set and a toothpick stuck into the cake comes out clean).  Remove the cake from the oven and allow to cool in its pan for 10 minutes, then turn it upside down (carefully!) out of the pan onto a cooling rack and let it cool completely.  (The cake actually even gets better with just a bit of age, if you’d like to bake it the day before you plan to serve it.)

If you desire to ice the cake (and I’m not generally an icing girl, at all, but I really recommend this icing), put the butter, brown sugars, and heavy cream in a saucepan and heat over medium heat.  Bring this to a rolling boil, stirring constantly, and boil for exactly 1 minute (continuing to serve), then remove from the heat.  Allow to cool at least 10 or so minutes.  Then, whisk in the confectioners’ sugar until the glaze is really thick, but is still pourable.  (If you overthicken it, just whisk in a tiny splash of cream to thin it out.)  Sloooooowly pour the glaze over the cake to cover it, covering as much of the cake’s surface as possible.  Allow the glaze to set before you cut and serve the cake.

You are currently reading Apple cake with caramel glaze for the New Year at Five And Spice.