I’m finding it remarkably difficult to write this post.  It’s always hard for me when I really, really care about something.  You see, lefse for me, and many of my friends, is not just lefse.  It’s so much more.  But, maybe for the sake of those of you who haven’t had it – or haven’t even heard of it – I’ll start with what it is.

Homemade lefse (particularly when fresh) is hands-down one of the best foods on the face of this earth.  Truffles, caviar, foi gras, lobster, you’ve got nothin’ on lefse.  It is an inordinately traditional Norwegian potato flatbread.  Simple.  Soft and supple, a bit like a tortilla, but almost lacy thin and seductively buttery.  Hot off the griddle, they are absolutely unbelievable.  Our favorite – and the most traditional – ways of serving lefse are either wrapped around a hot dog and ketchup (don’t knock it until you’ve tried it!  You’ll never look back.) or spread with butter and cinnamon-sugar (brown sugar is equally tempting and adds a lovely caramel accent).  Really you could use them to wrap up just about anything, including, it turns out, the phenomenal combo of smoked salmon and scrambled eggs.  They are so good, I can’t even begin to wax adequately eloquent about them.  I would have to be a bard of potatoes. 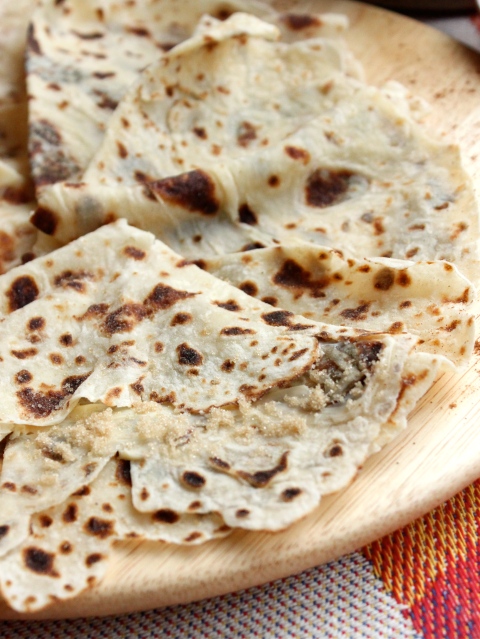 I didn’t know this when I was younger, though, because in Norway nobody makes their own lefse anymore.  It’s a lost art.  They buy it in the grocery store, factory made, in a plastic pouch.  Pretty much like most people around here would buy tortillas.  It’s still fine when it’s store bought, but it doesn’t beckon to you sweetly, coaxing you to keep plucking up just one more piece to spread with butter and savor with your eyes closed.  Homemade lefse will.  We had to be taught this by our neighbors in Minnesota, who were quite shocked to learn that Norwegians don’t make lefse anymore.  My Aunt and Uncle visited from Norway this Christmas, and we thought it would be hilarious to make lefse with them (it was), and they couldn’t stop repeating to themselves, with a chuckle and head shake, “Norwegians need to come to Minnesota to learn to be Norwegian.”

Lefse, with all the rolling and griddling it entails, is rather labor intensive, and doing it all yourself could get tedious.  So, as with many such foods – like the assembling of tamales or the stomping of grapes – we go with the time honored tradition of making a party out of it.  And what a party it is!  Lefse, we like to say, is best made in the company of friends and with a beer in one hand.  Having lefse parties with our neighbors is one of the things I look forward to most in the entire year.

See, here’s the thing about the neighborhood in Minnesota where I grew up, it’s kind of magical and idyllic.  Sure, we all have our issues, disputes, quirks, neuroses, etc.  We’re terribly human, and all.  But at the same time, our neighborhood is a collection of genuinely kind, thoughtful, interesting, wonky humans, all of whom care about connecting with and taking care of each other.  Growing up, you could be playing at anyone else’s house and be dependably fed, cared for, and scolded if needed.  You could go to any of the adults in the neighborhood for a listening ear or good advice.  You could tear around the neighborhood creating all manner of imaginary scenarios and always find playmates.  Our parent’s would pop into each others’ houses, unannounced, for a cup of coffee or a glass of wine and a chat.  We all did so many things together, teaching one another our traditions and hobbies.  Playing, skiing, picnics, shows, camping, crafts, stories.  It was like having a dozen moms and dads and a gaggle of brothers and sisters.  We were – and still are! – the type of neighborhoods that people nostalgically think may have existed in some golden past and that sociologists are trying to tell us probably didn’t actually exist.  But, I have news for those sociologists.  We exist!!!  And this gives me faith that other communities can build these kinds of deep yet playful connections as well. 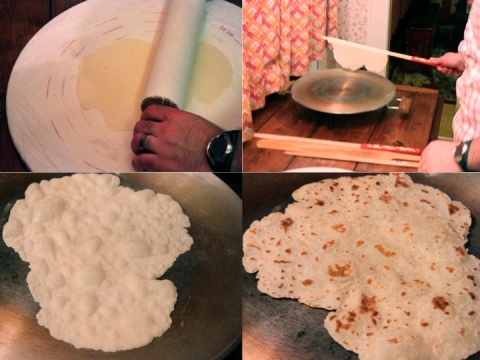 Lefse making is one of the most special things we do together.  It’s a tradition that I have also brought with me to the East Coast, pulling my friends in Boston together to cook and eat the flatbread.  With the beer and laughter flowing, clouds of flour puffing into the air and onto our clothes, warm lights glowing, heat from the griddles radiating, stairs and chairs to perch on and share stories, an evening with a lefse party is like a Scandinavian immigrant version of a Norman Rockwell painting come to life.  As I sat next to one of my neighbors, who at this point in my life is both a surrogate mother and friend to me, she gave a sigh of perfect contentment and said, “This is the kind of family I always wanted when I was growing up.  And now I have it!”  That’s exactly it.  Lefse is one of the things that has taken us from being friends to being family.

Potato Lefse (This is the recipe taught to us by our friend Beatrice Ojekangas, who has written a number of fabulous cookbooks on Scandinavian cooking) (makes enough lefse for about 10-15 people, in my estimation)

Read all the directions before you begin.  Usually I’m not a stickler for directions, but for good lefse, you really want to stick to the tried and true.

10 lbs. Russet potatoes – They must be Russets or it won’t work!!! (and that’s a funny story I’ll share another day)

You also need special utensils (sorry!), but they are really awesome special utensils: a lefse grill; rolling pin and pastry “sock” for the rolling pin; a cloth covered pastry board; a lefse stick; and a potato ricer.  And a bunch of ziplock freezer bags to store your finished product because lefse in the fridge is only good for a couple of days, but if you freeze it early, then you can thaw and warm it as needed it and it’s nearly as delicious as fresh.

1. Peel the potatoes, cut them into even chunks and boil them in a large pot of water until just tender when poked with a fork.  You don’t want them to be mushy.  Drain the potatoes, then press them through the ricer into a large bowl.  Mash in the butter, cream, sugar, salt, and baking powder, making sure you get rid of any lumps.  At this point you have the world’s most delicious mashed potatoes, you may wish to steal a little bite.  Leave the potatoes uncovered to cool somewhere – in the fridge or a cold entry way – at least 7 hours, preferably overnight.

2. The next day, when you are ready to griddle, prepare a place to stack the lefse rounds as they finish cooking.  We put a large plastic bag, covered with a clean towel on the counter and stack the rounds on top of each other on top of this, and cover them with another towel and plastic bag.  It seems unwieldy but it really works to keep them from drying out and losing their nice texture.  Preheat your griddle – ungreased – to 450-500F.

3.  Put 1/4 of the cold potato mixture in a bowl and use your hands to mix in 1 1/2 cups of flour.  Keep the rest of the dough in the fridge as you work with this portion.  Roll the floured dough into golfball sized balls and place these in a separate bowl.  Flour the pastry board and the rolling pin (with the sock on it) are well floured.  You need to use a lot of flour to keep the lefse from sticking to things.  Sticky spots are your enemy!  They can cause disasters, and if you get one, scrape it up immediately and rub a whole bunch of flour into it.  Place a dough ball onto the pastry board and gently roll it out until it is paper thin.  We generally have the goal of rolling out large circles, but they often wind up looking like various countries and continents.  Carefully lift the rolled lefse by skooching your lefse stick all the way under it, right down the equator line of the lefse, so the tip of the stick pokes out on the other side.  Lift and transfer to the griddle by laying one of the hanging sides of the lefse flat on the grill (the other side will be folded over it as if it were a quesadilla), then rolling the stick and unfurling the other half (the folded over half) so the entire thing is lying flat on the grill.  When the lefse has bubbled up a bunch, lift an edge and peak to see if it has brown spots.  When it does, gently use the stick to flip the lefse (in basically the same way as you transferred it to the grill) and cook the other side just until it has brown spots.  Each side only takes 1-2 minutes.  If they start to get crispy either you have cooked the lefse for too long or your griddle is on a bit too high.  When the lefse is done, transfer it to your prepared space (with the towels and plastic bags).

4.  Keep cooking the lefse until you have used all your dough.  As you run out of prepared dough balls, take another quarter of the cold potato mixture, mix in another 1 1/2 cups of flour and roll more balls.  You may need to set up a second towel-plastic bag receiving area as your stack gets tall.  You should also be eating plenty of lefse fresh, as you cook it, smeared with butter and sugar, or wrapped around tasty treats.

4.  When you’re all done, you can keep the stack of any lefse that’s left uneaten pile overnight to cool.  Then, fold the lefse rounds into quarters (they look like fans), put 6 lefses into each ziplock bag.  Refrigerate any lefse that will be eaten in the next couple of days and freeze the rest.

You are currently reading Lefse at Five And Spice.