I’m considering making a cross-stitch pillow (you know, the kind that usually says something like: “God bless this house”) with the sage words, “deadlines are the mother of productivity,” probably in a nice shade of blue.  We all know it’s true, even you crazy people who are good at spreading your workload out over time.  Then again, there’s a catch.  The deadline has to be close enough, otherwise it becomes the mother of determined and inventive procrastination.  That’s how I found myself today, attempting to figure out the origins of the phrase “A day late and a dollar short.”  I started musing about it yesterday, and it kept nagging at me until finally today I turned to the internets to try to figure it out.  And yes, I do have access to, YouTube and Facebook and Minesweeper, so I had absolutely no excuse for phrase etymology being my chosen form of mindless amusement, but whatever.  Oh and in case you’re wondering, there’s not much out there about the phrase, though I did find that – maybe – the first written use of it was in a comic strip in the late 1930’s.

I’m hoping that this sudden concern with a saying that basically means “too little, too late” isn’t my subconscious reminding me about the direction my work may be heading if I keep letting myself procrastinate like this.  I would say that I was thinking about it in relation to the fact that I’m giving you a latke recipe today, when Hanukkah ended last week, but actually that would make it several days late, but definitely not a dollar short.  I’d say it’s worth at least, like, $7-12 more than you could possibly wind up paying for them!

Suffice it to say, I do know that Hanukkah is already over, and probably a latke recipe would have been more useful then, but having made these I’m going to maintain that if your latkes are wonderfully delicious and flavorful, then they deserve a place at the table any time of year.  Before this batch I had never made latkes before.  I had eaten them, sure, but I’d always felt less than over the top enthusiastic about them and therefore never pursued making them.  But my better half is Jewish (and he’d probably say that that’s his better half 😉 !), so I decided that I really should put in the effort and give it a try.  Then he came home and announced that he wanted to learn to make latkes, so obviously the universe was giving me some sort of signal.  Fried potatoes don’t really do it for me in general (I don’t even like French Fries – shock and awe!), so the trick was finding a latke that would have lots of fantastic flavor packed in there with the potato.  At a friend’s party last week we had some divine Indian spiced sweet potato latkes, and those are next on my list, but for take 1 it felt somehow more authentic to make my first latkes with regular potatoes.  Luckily, since the universe was already on my side, things aligned perfectly when I got to test a recipe for latkes with blue cheese and red onions for Food52.

The original version is by a very cool lady who owns a vineyard in California who goes by dymnymo.  I have to admit, I was a bit nervous going into it.  The pancake batter seemed so fragile, so insubstantial, I was worried all the latkes would just fall apart.  I was worried that I would undercook them and have icky raw onions and potato in the middle.  But, they wound up being quite easy and seriously tasty.  Golden and crispy on the outside, and on the inside a rich blend of sweet red onions and earthy salty blue cheese.  They were perfect with just a sprinkling of sea salt on top to add another little punch.  They’d also be fabulous topped with the traditional sour cream and apple sauce. 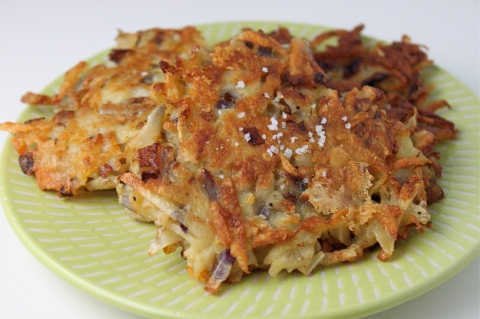 a couple of pinches of fresh ground black pepper

Grate the potato using a box grater (the largest holes).  Then, put the grated potato in a towel and use the towel to squeeze out as much moisture as possible.  If you have one, you can also use a potato ricer – just put the grated potato in it and use it to squeeze the moisture out.  Put the drained potato into a medium bowl with the diced red onion.  Stir in the flour, thoroughly to coat the potatoes.  Then mix in the eggs, the blue cheese, and black pepper.  In a medium-large frying pan melt 1 Tbs. of butter over moderately high heat, then add the olive oil.  Drop the potato mixture in 2 Tablespoonful mounds into the frying pan, then flatten them into about 1/2 inch thick, or a little thinner, pancakes using a spatula.  Cook until they are deep golden brown and crispy on the bottom sides, then flip them and cook the other sides until they are deep golden and crispy. Transfer the cooked latkes to an ovenproof plate lined with a paper towel.  Keep the finished latkes in a warm (200F) oven while you cook the rest of them.  Add the remaining butter and the olive oil to the frying pan and cook the rest of the potato pancakes in the same way (adding more butter and oil if needed).  Before serving, sprinkle the latkes with a pinch of fleur de sel.  Serve them as a side for brisket or fish or as a tasty snack.  They were also a delicious addition to breakfast with some eggs on the side.

You are currently reading Blue cheese latkes at Five And Spice.