Dave and Linda from Monkeyshines in the Kitchen chose Soufflés as our November 2010 Daring Cooks’ Challenge! Dave and Linda provided two of their own delicious recipes plus a sinfully decadent chocolate soufflé recipe adapted from Gordon Ramsay’s recipe found at the BBC Good Food website. Yes, souffle.  That torment of culinary sphere that leaves chefs quivering with apprehension, hovering by the oven door that they long, yet fear to open.  Oh the triumph of a towering puffed souffle, and the agony of defeat when you watch it collapse, slumping in the middle like a drunk at the end of a long night.  There’s a rather inflated mythology around the souffle (which, by the way, is French for ‘to breathe’ or ‘puff up’ – an appropriate name, I’d say), but in all honesty, I’d say it doesn’t deserve it’s reputation as a futsy, challenging, delicate or impressive process.  It doesn’t require a magic wand.  You don’t need to move your kitchen into an anti-vibration chamber.  It’s barely harder than making an omelet, actually (Of course, maybe that’s just because I’m horrible at making omelets.).  And who was it that said, “the only thing that will make a souffle fall is if it knows you are afraid of it.”?  I think it was James Beard.  Genius.  It’s totally true.  You can make a souffle!!!  You can even make a souffle without owning a souffle pan – I did.  The real question is, do you want to?  (Answer, yes.  If you make the right kind.  That kind being a cheesey one.)

Before being challenged to make a souffle this month I had made souffle twice before, both dessert souffles.  In college the boy I was dating and I decided to make an orange souffle with Grand Marnier.  We were pretentiously gourmet like that – everyone has their college phase 😉 .  However, oh the irony, neither of us owned a metal mixing bowl for whipping up the egg whites in.  So, we used a little aluminum cooking pot, and, well, it turned the egg whites an extremely unappealing shade of green.  We made the souffles anyway, but it was pretty hard to enjoy eating moldy-green slightly metallic-tasting souffles.  In spite of this, I tried again not too long afterward, whipping up some chocolate souffles for a dinner party.  I successfully managed to keep the egg whites white, however, this time I discovered that I don’t like my chocolate to be spongey and airy.  I like it to be dense and fudge-y or silky.  In short, I decided I really didn’t like souffles. 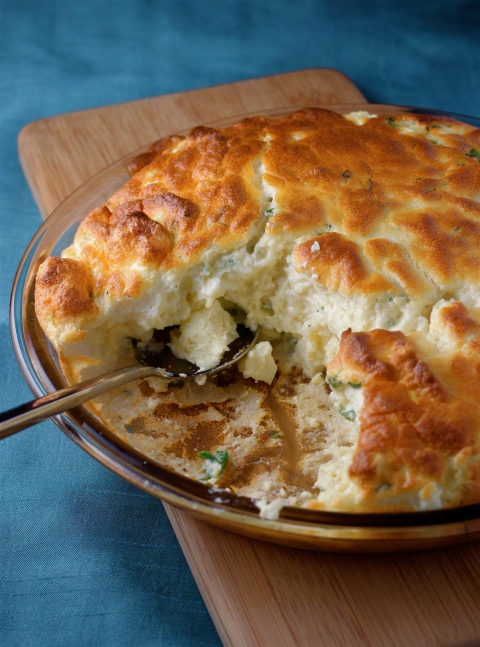 Joel had never had a souffle at all before, but growing up in his family his mother kept a running joke about souffles.  Whenever they bugged her about dinner she threatened to make a spinach souffle because in their world this was about the most horrendously unpalatable food-related idea they could come up with.  So, he was not particularly predisposed to like souffles.  Therefore, when I suddenly needed to make a souffle, I decided it would be hilarious to make a spinach souffle.  It would be like getting the character in the Dr. Seuss book to finally eat green eggs and ham.  It was going to be this amazing triumph, on par with making a souffle that rises and doesn’t collapse.  Oh wait, it was going to be making a souffle that rises and doesn’t collapse!  Er, well, except that my first attempt failed.  But not for the usual reasons.  You see, I had sauteed the spinach and garlic.  I had prepared the eggs.  I had the butter waiting in the pan to make a roux (because pretty much all savory souffles start with a roux, to which you add milk and egg yolks and whatever else you want in it).  I was waiting for Joel to come home to continue because he had been charged with picking up milk and a few other random groceries on the way home from work.  He came bursting in the door and presented me with the groceries while declaring, “I’m so hungry!”  “Great!”  I replied, “I just need the milk and then I can finish the dinner in about 25 minutes.”  “The milk!”  He exclaimed, a look of dismay spreading across his face.  Of course.  The one thing he had forgotten was the one thing necessary for dinner.  We briefly considered giving up and going out for Thai food, but I had prepared everything else, so I wound up beating the eggs with a little splash of cream, pouring them over the spinach and making a frittata.  So much for that souffle. 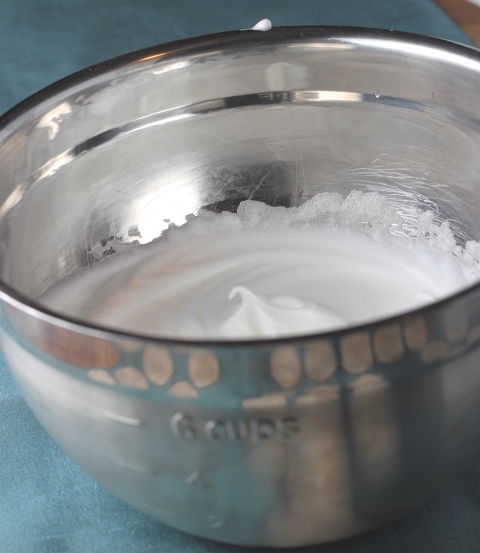 But, I wasn’t going to give up!  Even though this left me with even less desire than ever to make a souffle, I felt that it was my duty to push through.  I had low expectations, but a couple of days later – once the milk made it home – I tried again.  This time, I decided to add in some cauliflower florets and cheddar cheese, partly because those were the two major flavoring options we had, and partly as another little homage to a particularly detested childhood food.  (When I was little, my mom used to make this cheesy cauliflower dish, and I was capable of throwing up on the spot in order to avoid having to eat it).  Wow!  It was truly delicious!  Not surprisingly, it tasted like an egg-y, cheesy cauliflower dish because that’s what it was.  But, it was as if someone had taken a cheddar and cauliflower omelet and jet-puffed it!  Each bite was ehtereal.  Lighter than air, and laced with a richness from the cheese and a faint nutiness from the browned butter base that beautifully buoyed the unique, sweet flavor of the cauliflower.  I never would have expected this (I actually started cooking that evening by heaving a sigh and saying, “I do not want to eat a freaking souffle!”), but I will most definitely be making this again.  With a nice green salad and a little bit of crusty bread on the side, it makes for a satisfying and really quick weeknight supper!

Cauliflower souffle (serves 2 or 3 as a main course, but doubles easily, you just have to increase the baking time to about 40 minutes)

§ 2 Responses to Cauliflower and cheddar souffle

You are currently reading Cauliflower and cheddar souffle at Five And Spice.