Have you heard?  Foraged is the new local.  Which makes local food the new organic.  Which makes organic, I don’t know, the new black?  Or maybe the “please, please, make an effort to buy food that reaches at least this standard of quality, yes I know it’s expensive (though not for everything), but this is your health, your planet, your humane treatment of farm workers and animals we’re talking about here.” (Somehow I don’t think that’s going to catch on as a slogan…)

Anyway, foraged food has been catching on for a while and it seems to be really picking up steam now.  Many popular restaurants (especially in California – big surprise) are now relying on locals to forage various interesting greens and mushrooms for them.  The cutting edge restaurant, Noma, in Copenhagen is exploring new territory in Scandinavian cuisine by actually looping right back around to explore the old territory of the wild berries, roots, herbs, fish, and other foods that have been traditionally collected in the area to craft beautifully plated dishes that distill the essence of the landscape and culture.  I know some people are a bit skeptical, but I’m a firm believer in terroir, the term used in wine to describe the way a particular place imparts a unique flavor to the grapes that are grown there.  And, if it works for grapes, why on earth shouldn’t it work with other food too?

Some types of foraging are fairly easy to pick up.  I have no problems recognizing and subsequently devouring a nice range of wild berries, including the standards like strawberries, raspberries, blueberries and blackberries, as well as more exotic varieties like cloudberries, crowberries and sumac (which I don’t think are technically berries, but I categorize them as such).  Some nuts are pretty easy too, though I had one very unfortunate attempt at cooking and eating acorns that left me with a bad taste in my mouth (literally!  haha).  Then there are other types of foraging, where you have to dig a bit more into the local lore of the flora and fauna – or be slightly foolhardy.  Like my island art experience where we tried to forage for the dinner on the last night.  Did I mention we ate some kelp?  It was rubbery.  We also had wild radishes, and stir-fried milkweed pods…I’m really glad we had the extra food that we’d packed in to supplement.

Then there’s mushrooms.  Mushrooms, I think, are one of the most rewarding things you can forage for.  It seems all the most amazing, flavorful kinds you have to find in the wild; they can’t really be cultivated.  But, mushroom hunting is also one of those things where, if you screw up in your identification of an ambiguous little brown mushroom, the consequences can be disastrous.  So, it pays to have some expertise.  Also, most of the people I know who mushroom-hunt learn a couple of easy to identify varieties, and then stick to those.  This is why, if someone discovers where to find a good stand of morels or chanterelles, they guard this secret ferociously. 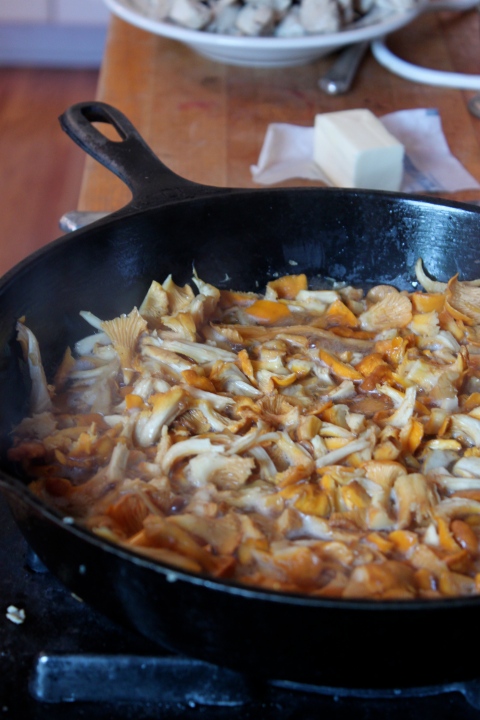 One of my very best friends and her husband are both naturalists.  And let me tell you, these are the kind of people you definitely want to have around when you’re wandering through the woods (actually, they are the kind of people I want to have around all the time because they’re fabulous, but they offer an additional specialized skill set once you get into the forest).  They’re full of fascinating information about birds, and trees, and tracks, but most pertinent at the moment, they have some sort of honing mechanism for seeing patches of edible mushrooms off to the side of the trail.  So, when Joel and I thought we were simply going with them for a little trail run, we managed to come home with a shirt and a hat full of chanterelles.  The mycological version of striking solid gold!

The best part of all was that we were able to go back to their place together and cook our bounty up to share as a delightful lunch – with a whole slew of friends who showed up on the doorstep.  Rumors of wild mushrooms fly faster than a falcon.  You don’t have to have found the mushrooms yourself for this mushroom cream sauce – our friends’ favorite preparation – to be delicious.  But it somehow always makes it just a little bit tastier when you’ve grown or picked the food yourself.

This could also be made with many other varieties of mushrooms. The good wild varieties of mushrooms are so flavorful this sauce doesn’t need any additional spices, but if you’re using more standard mushrooms like portabellas, or if you just want to mix things up a little, you could try adding a touch of sage or dash of nutmeg.  This sauce is wonderful served over almost anything, from fish to chicken, to pasta, to potatoes.

You are currently reading Chanterelle cream sauce – Fun with naturalists! at Five And Spice.