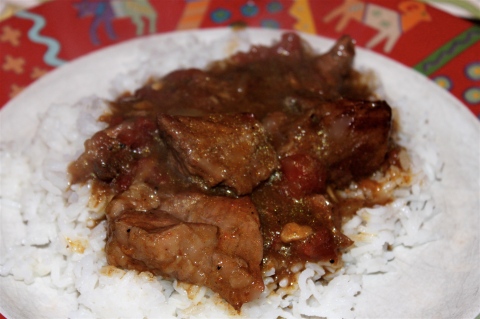 Curry + no attempt at styling = not so photogenic! Oh well.

My mother treated me to a facial while I was in Duluth.  And who am I to say “no” if she wants to spoil me?!  As I was getting the heck squeezed out of my face (that would be the less pleasant than the part where you get massaged with lavender oil part of a facial), I found myself deep in conversation with Christal, the skin care specialist, about her chickens.  You see, she owns the day spa and treatment center I was at, but she’s only there a few days a week, the rest of the time she and her husband operate a small, sustainable farm bursting with a wonderful embarrassment of unusual heirloom vegetables and heritage breed animals.

Hearing her talk about her flocks of chickens and turkeys that roam the fields, and spunkily prefer to fly and roost in trees rather than in hen houses almost made me cry for joy (no, it wasn’t just the stuff that had run into my eye).  These days commercially bred chickens and turkeys are raised to have such huge breasts (because people want their boneless-skinless chicken/turkey breasts), they can barely stay standing, let alone fly into trees as they ought to be able.  To hear about these animals, living healthfully and true to their natures, and then being harvested in great thankfulness and dignity (it actually can be done) was so moving to me.  By the end of the conversation, I was this close to completely pitching city/university life and going back to the land!  Can we have a Homesteading Act part deux?

Commercial methods of raising animals are one of the most harmful things we’re doing to our planet, they produce greenhouse gases, decimate land with large pits of manure, and treat animals completely horrifically, keeping them inhumanely crowded and in the dark.  Many environmentalists recommend ceasing to eat meat entirely in order to mitigate all of this destruction.  If you can be a vegetarian, I’m not opposed to that certainly.  But, for myself, I also think that humans evolved to have meat as a part of their diet, and I would rather that we eat meat in far smaller portions, and move towards raising all of our animals sustainably, instead of giving it up entirely.  It can be harder to find local, sustainable meat, and it costs more, but I believe it is well worth it considering the benefits for your body, the planet, and the livelihoods of small farmers.  Even in the Boston area, for example I have found a couple of community supported agriculture programs and farmer’s markets that offer local meat, and lots of local dairy and eggs.

What does sustainable animal farming look like?  Mostly it involves a lot of grass!  If you let cows, and sheep, and goats, and chickens, and the like feed on grass as they’re supposed to, and you monitor which pastures they are on when (I won’t go into detail), you can raise healthier animals and leave the land they are grazing on healthier too.  It’s the growing of huge fields of corn and soy to feed the animals, and keeping the animals confined in huge factory like buildings that are the main sources of the problem.  Not only this, but animals that have been raised on grass (and hay – harvested grass – in the winter) and allowed to peck on buds, and stretch their legs, are far healthier for us to eat.  And so are their milk products, and eggs.  It gets pretty close to a win-win situation, if I’ve ever seen one.  But, it takes a lot of hard-work, amazing skill, and attentiveness to their land and animals on the part of the farmer. 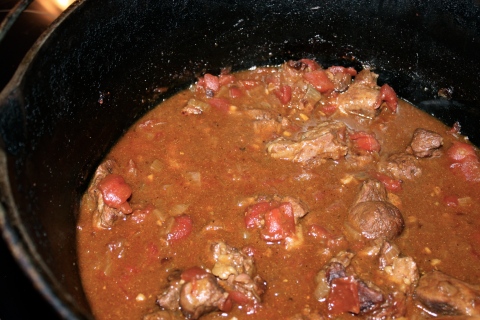 Raising animals on grass can be especially promising in those northern hilly areas that don’t have the topsoil for fields of wheat, and where vegetables only take up pockets of the land for part of the year.  I was at a talk about local agriculture given by a New Hampshire (if I remember correctly) farmer who is the head of the Northeast Organic Farmer’s Association, and he proclaimed  that Northern areas can support more local agriculture by “grass farming.”  He said proudly that the farmers he works with think of themselves as grass farmers first, and it just so happens that by raising healthy diverse grass, they can maintain healthy diverse flocks of cows, chickens, lambs on them.

I noticed this a lot while I was in Northern Minnesota.  My parents buy nearly all their meat directly from local farmers.  A half cow from one, a pig from another, a lamb from another, a turkey from yet another…  There are also some amazing dairies where the cows are entirely pasture raised.  One of my favorites is Green Pastures, which makes fabulous goudas with raw milk – you take one look at the farmers, who have grown up eating their own cheeses and milks, and you’ll instantly be convinced that raw milk cheese is good for you!   Then, up the North Shore near Grand Marais there is a wonderful, small dairy with the world’s most amazing view of Lake Superior.  And there stand the cows, munching contentedly and gazing out over the waves and the horizon.  This may be why their milk is so delicious.  The family who runs the dairy, I’m pretty sure, has been doing it the same way for generations.  The land wouldn’t have lent itself to them getting caught up in the large-scale corporate way of running a dairy anyway.  The dairy is entirely self-service, so you can choose your (raw!) milk, and butter, and cream, and cheese, and even ice cream, mark it down in the register and just leave an envelope with money.  That such a system has worked well enough to keep this dairy in business for years is another thing that gives me hope and brings me to the verge of tears for joy (okay, yes, I’m a little extreme in my emotions, I know).

A patient of my father’s turns out to raise pastured goats in that area as well.  So, of course my dad wanted to buy some from her!  And so there we found ourselves with a goat leg, a tenderloin, and some ground goat, and no experience cooking goat at all.  But, I’d had both goat stew and goat curry before, so I declared that curry was the way to go. We used an awesome curry recipe from The New Basics Cookbook (by the authors of The Silver Palate cookbook).  Don’t be phased by the long ingredients list – it’s mostly spices.  It’s one of the few curry recipes I’ve used that have turned out just how I like curry to be, intensely, complexly flavorful and not too soupy.  Because I like it so much, and have had such bad luck with other curries I’ve tried to do, I don’t generally monkey with this recipe.  But, making it with goat instead of lamb didn’t seem like too big a shift.  And, in the end it turned out splendidly.  Of course if you don’t have a goat leg fall into your lap, you can use lamb like the original recipe calls for.  But, I think might have liked the goat even better.  It was so tender, and even milder in flavor than lamb or beef! 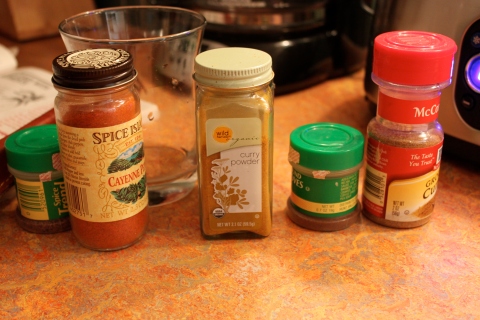 My Favorite Curry from The New Basics Cookbook (serves 4-6) 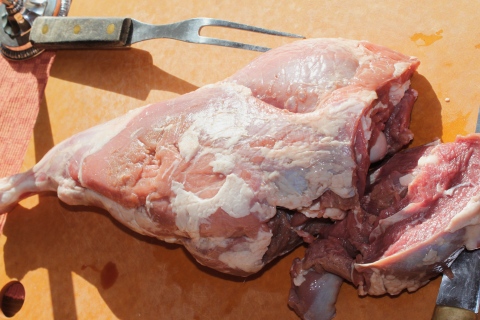 That, my friends, is what I call a goat leg!