At this point in my life, pie and crisp may be the first things that come to mind when I think of rhubarb.  And sure, it’s what I just wrote about.  But, this wasn’t always the case. I think that I didn’t actually try rhubarb crisp for the first time until I was in late childhood when I had it at a neighbor’s house.  Rhubarb pie came even later!  My first experience with eating rhubarb was one of the simplest possible, and one I still love.  You just take a freshly picked and cleaned stalk of rhubarb (leaf removed!) and a small cup of sugar.  Dip the end of the rhubarb in the sugar, then take a bite.  The sugar hits you first and softens the blow of what you’re about to experience.  But, the sweetness of the sugar can’t shackle the true nature of rhubarb.  The amazing, almost biting, sour flavor bursts through the thin veneer of sugar to fill your mouth, making you pucker your lips and squinch up your eyes.  Then you dip again and go back for more!   It’s the kind of eating experience that gives you an adrenaline rush.

But, if you’re not quite up for that, the other way I remember having it was as different from this as could be, wonderfully sweet rhubarb soup – topped with whipped cream of course.  This is a pretty standard dessert soup in Norway, as is rosehip soup actually.  Andreas Viestad, the wonderful (and cute – I got to help him make some desserts for a talk once and totally developed a crush, hehe!) Norwegian food writer and cookbook author says he hated rhubarb soup when he was little because his family made a really sour version.  This one does not run up against that problem.

You can make it either pretty fluid (more soup like) or else add in a little cornstarch/potato starch to thicken it up and make it more like a compote, which is how I prefer it.  In this instance (and you can only do this if you make a thicker version), as in many instances, I decided that more whipped cream than just a dollop on top was in order, so I layered the chilled soup/compote with sweetened whipped cream.  Mmmmm.  So many of my favorite things!  And it’s so lovely too.   Oh, I also threw in some strawberries that were leftover from the crisp.  It may be a bit trite, but I think strawberries and rhubarb can never be wrong together. 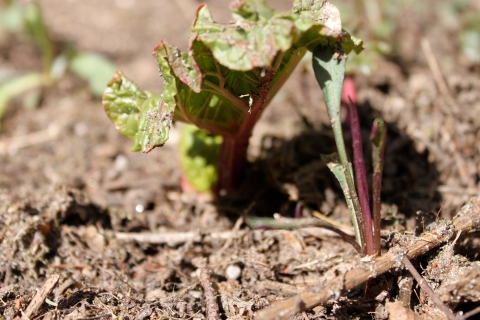 Baby Rhubarb in the back yard!