Until I moved to Boston when I was 23, it just never occurred to me that backyards don’t automatically come fully equipped with rhubarb.  All my life I’d just had rhubarb there for me each summer (in cold places it doesn’t appear until summer!).  Even my apartment in college had rhubarb in the yard!  So, when I moved to Boston and the time of year rolled around when I start pining for rabarbra suppe (rhubarb soup) or rhubarb cake or pie or compote, I was a little shocked to find that our tiny snippet of a back yard didn’t deliver.

None of my apartments since then have come with rhubarb either!  It’s terrible really.  I’d like to register a complaint!!  Also, did you know that if you plant a rhubarb, you have to wait two years to harvest any or you might kill it.  How terribly inconvenient for your transient early twenties!  But, this may finally be the year to pop one into the vegetable garden.  We’ll see.  (Speaking of veggie gardens, did you know that rhubarb is really a vegetable?  And – most people already know this, but it’s always good to be reminded – the leaves are poisonous, so cut them off and don’t eat them!!  And wash your hands and the stalks.) 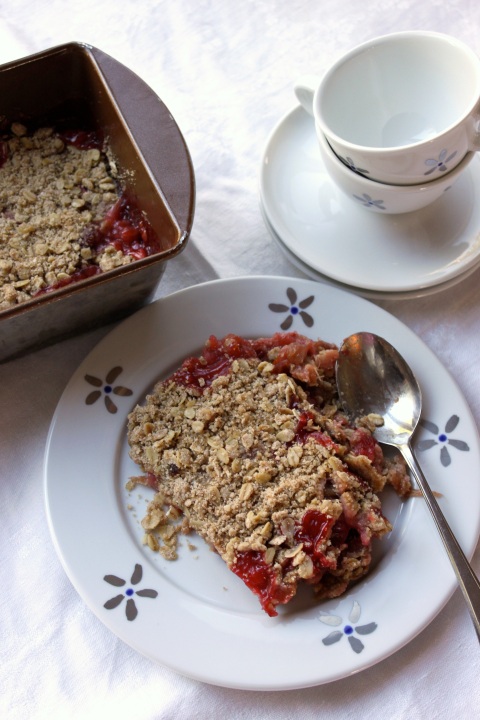 But, I also absolutely refuse to buy rhubarb at the grocery store.  It is not a grocery store food!  Sometimes you have to put your foot down.  So, often my spring/early summer passes by in a distressingly rhubarb-deprived state.  Unless I visit the parental units at the right moment…This year I’m too early.  Phooey!  But, seeing all the photos of and recipes for rhubarb dishes sprinkled about the world wide web almost drove me to distraction.  I nearly lost it!  I need rhubarb!!!

Then I noticed an odd and magical (ie. metaphorical) light emanating from the parental freezer.  What could that be?  I pulled open the drawer, and (cue exultant brass music) there it was!  A large ziplock of rhubarb, frozen after last year’s haul, and just waiting for me to come take care of it.  An April miracle!

When I have fresh rhubarb I often just chunk it up and throw it into a simple pound cake.  There it provides wonderful smooth, tart bursts of pink flavor amidst the buttery sweetness of the cake crumb.  Pie is also good, but my desire to make a crust was running low.  The alternative, a rhubarb crisp, of course!  I tried a new crisp recipe that I was supposed to test anyway, with the addition of some strawberries I also turned up.  And – will delightful and tasty wonders never cease (or could it be that I halved the recipe so there would be leftover rhubarb)? – there was enough rhubarb left to make a kind of rhubarb fool/rhubarb soup riff too (which will be coming onto the blog scene in a couple days here).   Oh rhubarb, you are so delicious!  Especially with whipped cream.  Please promise me you will whip some cream with vanilla and sugar to serve atop this wonder of the backyard. 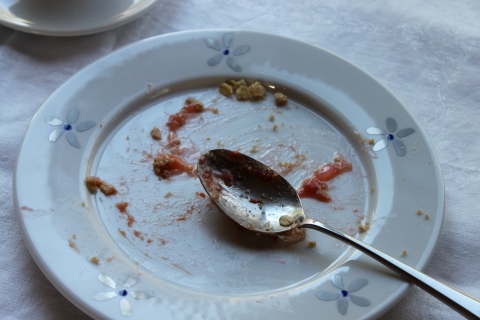 You are currently reading Backyard rhubarb crisp at Five And Spice.