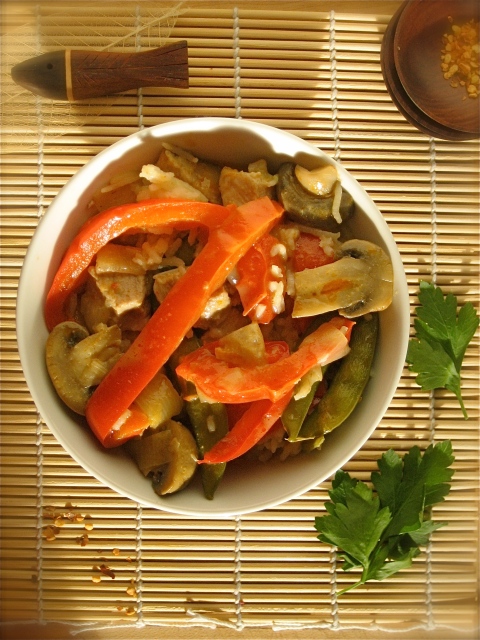 I’m afraid to admit that one of my resolutions for the new year was to try my hand at some Thai cooking – in fact, I think I resolved to “get really into” it.  This was a resolution because Thai is one of the favorite cuisines around this little household.  I’m afraid to admit it because January, and February, and very nearly all of March passed by without me so much as making an attempt.

We certainly ate a lot of Thai food in that time!  We have a friend (who we refer to as Cephas though that is not his name, but I will not attempt to explain) who grew up in Thailand, and he has been kind enough to start taking us to Thai restaurants and guiding us boldly through their menus.  Jiminy Crickets! do you ever get a different experience at a Thai restaurant when someone who speaks the language is with you!  Cultural solidarity comes out strongly, as does a sense of being invited to the inside, a special (non-physical) reserved dining room of sorts.  You get offered an entirely different menu (which the rest of us can’t even come close to making out!).  You are told in no uncertain terms by the proprietors which ones are the special dishes that you have to try, no excuses taken.  I think if you can prove a certain level of familiarity with Thai culture, the wait staff and chef take it on faith that you will accept a certain number of more esoteric ingredients as totally normal, even gourmet, rather than weird.  This is how we wound up eating such things as “horse piss eggs” (we definitely didn’t ask) and stinky beans.  They were quite good!  I mean, all thing considered, I come from a culture that invented lutefisk and an inedible substance know literally as “old cheese”, I should be open to virtually anything. 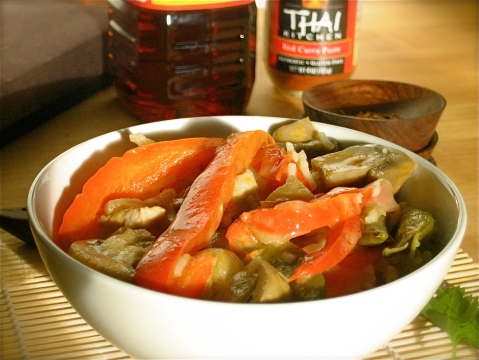 In spite of the miles we were taken beyond Pad Thai at those restaurants, I still didn’t gather up the courage to give it a shot at home.  If anything, I got a bit more intimidated.  You see, Thai food seems so darn exotic to me – way more so than a stir fry, for some reason.  And it requires investing in a bunch of things I don’t standardly stock my kitchen with, like coconut milk, fish sauce, oyster sauce, tamarind paste, kaffir lime leaves, special peppers and basils.  Stuff like that.  But, then, this past week, Cephas was out of town on the day we’ve been taking our Thai safaris.  Fearing we would go through serious withdrawal, and knowing that I did have a jar of Thai red curry paste around (for mixing into mayo to go with salmon cakes, duh), I decided to just go for it.

Um, that was easy!  The coconut based curries aren’t the epitome of Thai cuisine, but they’re wonderfully flavorful – with the classic Thai balance of sweet, savory, salty, and spicy – and man do they turn out to be simple to make!  And infinitely variable!  As long as you have curry paste, a can of coconut milk, some broth (chicken or vegetable), and a little dash of fish sauce (I decided to go for it and get some) you can pretty much cook whatever mix of vegetables and protein sorces (meats, seafood, tofu cubes…) you want.  There are certain ingredients and combinations that are classically Thai (or at least, what you always find at Thai restaurants).  Red curry often has bamboo shoots, basil leaves, bell pepper, and carrots.  Green usually also has eggplant, green beans, and mushrooms.  Yellow is graced with some pineapple and potatoes in addition to the peppers and carrots.  Etc…  But, unless your name is Nittpah – or heck, even if your name is Nittpah – you should not feel bound by what has been done before.  Give lots of different things a try!  Squash, or greens, any variety of mushrooms, root vegetables, chunks of fruits, all manner of meat or bean.  The nice thing about sweet-savory spicing is that it gives you lots of room to play.  Here’s what I did for mine: 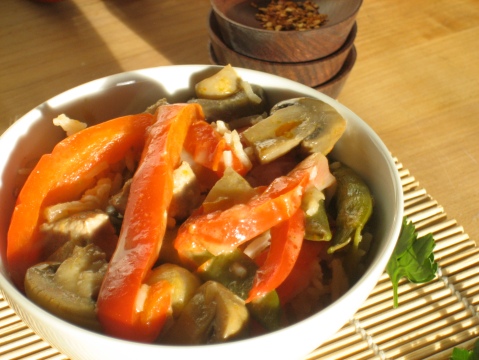 § One Response to Thai Red Curry with pork

You are currently reading Thai Red Curry with pork at Five And Spice.