This is a really great savory pie, a lovely hearty but not heavy supper or lunch.  But, something else first.  Everyone please take a look at my photos!  Finally, I have produced something akin to a nice photograph of my food!!!  How awesome is that?!  As far as I can tell, food styling and photography is pretty trendy right now – borderline obnoxiously so.  With the proliferation of a kajillion food blogs, it has become evident that there are also close to a kajillion rather good food photographers out there.  I am most definitely not one of them.  And it drives me crazy.  Because, even though I generally have a very negative gut reaction to things that are trendy (kind of an ironic sucker punch because I think I’m actually a sucker for trends) , I am obsessed with food photography.  But this is not new.  I have been obsessed with food photography since as early as I can remember.  Before I could even read, I have vivid memories of staring for long periods of time at pictures of food in my mom’s cookbooks.  Then later I graduated to my children’s cookbooks, and ordered my own subscriptions to cooking magazines before I was even in high school.  But, it never occurred to me to try to photograph my own food.  I never even owned a camera, so I didn’t take pictures of anything at all! 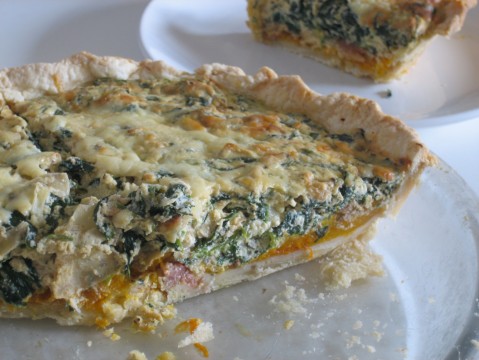 Then, I caved to my secret desire to blog about food and found myself wanting to have pictures on my posts.  This is how I made the very endlessly, mind blowingly, put on a sack cloth and rip out your hair-ingly frustrating discovery that taking good pictures of food is HARD.  Grrr.  But at the same time, I find it incredibly fun.  So, I’ve started to try to take better pictures.  I don’t even have a tripod (I use a pitcher!), and it’s awfully hard to save food to take pictures of it in the morning when the light in our apartment is optimal.  But, so be it, I am putting in the effort.  And, after much blood, sweat, and tears – or at least a lot of clicking, repositioning, and angry muttering – I feel I have finally taken some nice pictures.  New career, here I come…yeah right, but a girl can dream.

Anywho, this pie was the product of fond memories of a spinach ricotta pie a friend of mine served me at a dinner get together (she doesn’t cook meat, I can’t eat whole grains or legumes, so this pie and pizza were her go-tos when I came over!) and the fact that I still have some butternut squash from an epic farm stand pick up at the start of December. And, I have had squash and greens together before and they were awesome, so I knew the addition would work.  I used spinach, but really any cooking greens would be good, kale or chard, for example.  The addition of nutmeg was inspired by the thought of creamed spinach with nutmeg, and nutmeg in pumpkin pie, which shares a lot of traits with butternut.  Because I had a few pieces of uncooked bacon as well, I thought I’d sprinkle bacon bits on top for some extra salty, smoky goodness.  But, it would also rock as a totally vegetarian dish.

You are currently reading Spinach ricotta and butternut pie at Five And Spice.