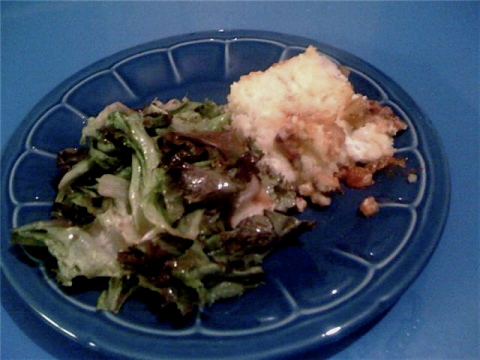 I apologize if it’s a bit hard to read this post over the sound of me patting myself on the back.  Yeah, I’m a little proud of this one – mainly because it rates pretty high on the tasty-deliciousness meter and it used up a hefty two pounds of mashed potatoes that I had leftover from a lefse party (lefse is a Norwegian potato flatbread that is really best made at a party, preferably with a beer in one hand!).  The temperature has finally gotten legitimately wintery here.  Of course, I grew up in northern Minnesota, so whenever the subject of the cold comes up I have to act all extra tough (I mean, because I am, of course), and say things like, “This isn’t cold!  It never even gets really cold in Boston.  Try a couple of weeks of minus 40 and then get back to me about cold.”  This generally gets a lot of looks of shock and horror at the idea of that kind of weather, and then everyone returns to complaining about how cold it is.  Because it is.  Certainly, it is at least cold enough to have me hovering near my oven every evening coming up with reasons to turn it on.  Even if I’m making something on the stovetop, I’ve been able to scheme up some way to end it in the oven.  Case in point, this spiced up rendition of something akin to shepherd’s pie.

I’m lucky enough to get my meat from a local farm, and one of the cuts I get from them is ground lamb.  It’s also pretty easily available from the grocery store and is especially lovely for Indian or Greek flavored dishes, like little cumin spiced meatballs in a curry sauce or spiced with lots of oregano, basil, garlic and a little cayenne on a pita with a cucumber dill sauce, or as lamb burgers topped with roasted red peppers and feta (not grilling in this weather though, yipes!).  One of my favorite things to make is a Greek flavored tomato lamb ragout with spinach, served over orzo (a pasta that looks like big grains of rice).  Which is what I decided I wanted to make.  Except, well, I didn’t have spinach…or orzo.  What I did have was a heckuva lot of mashed potatoes.  So, I thought to myself, ‘well if shepherds in Ireland could put mashed potatoes on top of lamb and bake it (because obviously shepherds invented shepherd’s pie), couldn’t shepherds in Greece?  And if they did so, wouldn’t they probably add some feta or goat cheese to the mashed potatoes first?’  Answer, who knows!  But they would have been wise to.  And so, channeling Zorba the Greek tending a flock, that is exactly what I did.

The recipe for the ground lamb is based off of one I saw in a magazine years ago – Eating Well, maybe.

You are currently reading Greek-spiced Shepherd’s Pie at Five And Spice.